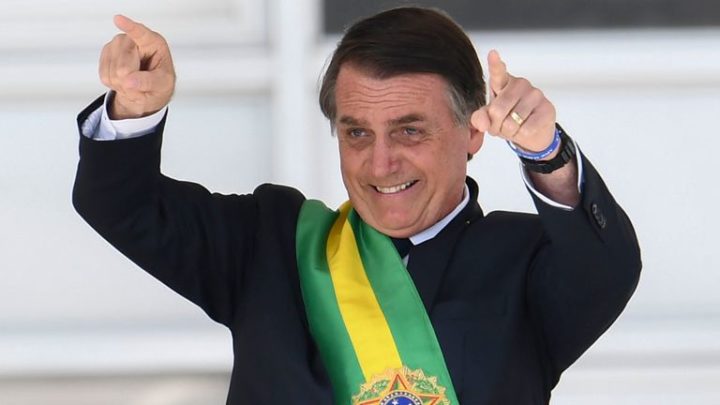 By BBN Staff: President of Brazil, Jair Bolsonaro, said that he will reject some $22 million in aid pledged by the G7 nations, saying that he will not accept any aid from France unless French President Emmanuel Macron withdraws statements that Bolsonaro finds insulting.

“To talk or accept anything from France, even with their very best intentions, he will have to withdraw his words, and then we can talk,” Bolsonaro said. “First he withdraws them, then he makes the offer, and then I’ll answer.”

Bolsonaro contends that Marcon though various statements, has insinuated that Brazil does not have sovereignty over the Amazon and that Marcon is trying to protect French agriculture from Brazilian competition is disguising his intentions through the promise of aid. Bolsonaro also said that the other countries offering aid are not doing so out of charity but rather as a means of being able to tell Brazil how to run its affairs.

The Amazon has seen almost an 80 percent increase in fires since 2019, coinciding with the election of President Bolsonaro and a government policy change that saw the reduction of fines for environmental offenses. Bolsonaro has been criticized by environmentalists for wanting to open up the Amazon for business interests such as mining, logging, and farming.

Originally, Bolsonaro had taken a hands-off approach to dealing with the fires and even accused environmentalists of starting them. He has since changed his position and admits that farmers “may” be responsible for some of the over 2,500 fires which are currently active in the Amazon. Over the weekend Bolsonaro deployed over 44,000 military troops to assist with fire fighting efforts and even employed the use of warplanes to drop water on burning areas of the Amazon.

The move to fight the fires comes after countries in the European Union threatened to cancel trade agreements and seek other economic sanctions against Brazil for not treating the Amazon fires with the priority it deserves.

The Amazon, which is the largest rainforest in the world, is known as the “lungs of the world” and is a vital carbon store that slows down the pace of global warming. Losing the Amazon could potentially have disastrous environmental consequences for countries all over the world, particularly countries like Belize, which is already seeing the effects of climate change through erosion in the south, damage to the
reef, and some agricultural difficulty with decreasing rainfall (not attributed to the El Niño weather phenomenon).