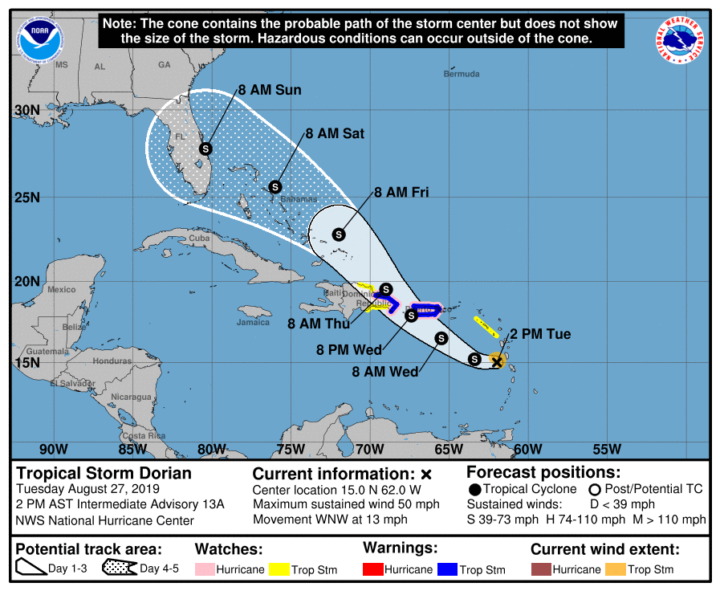 By BBN Staff: Puerto Rico and the Dominican Republic are preparing as Tropical storm Dorian approaches.

A Hurricane Watch is in effect for Puerto Rico and for the Dominican Republic from Isla Saona to Samana.

A Tropical Storm Watch is in effect for Saba and St. Eustatius, and for the Dominican Republic from Isla Saona to Punta Palenque and from Samana to Puerto Plata.

Interests in the Virgin Islands should monitor the progress of Dorian.

Tropical Storm Dorian is centered about 70 miles west-northwest of Martinique and about 370 miles east-southeast of Ponce, Puerto Rico.

Dorian is moving toward the west-northwest near 13 miles per hour.

Dorian is forecasted to move across the eastern and northeastern Caribbean Sea during the next few days, passing near or south of Puerto Rico on Wednesday, move near or over eastern Hispaniola Wednesday night, and move north of Hispaniola on Thursday.

On Thursday night and Friday, the center is forecast to move near the Turks and Caicos and the southeastern Bahamas.

Tropical-storm-force winds extend outward up to 45 miles (75 km) from the center.

Slow strengthening is forecasted during the next 48 hours, and Dorian is forecasted to be near hurricane strength when it moves close to Puerto Rico and eastern Hispaniola.

Tropical storm conditions are diminishing over the Lesser Antilles.

Since then, the island has  struggled to repair its infrastructure and power grid.