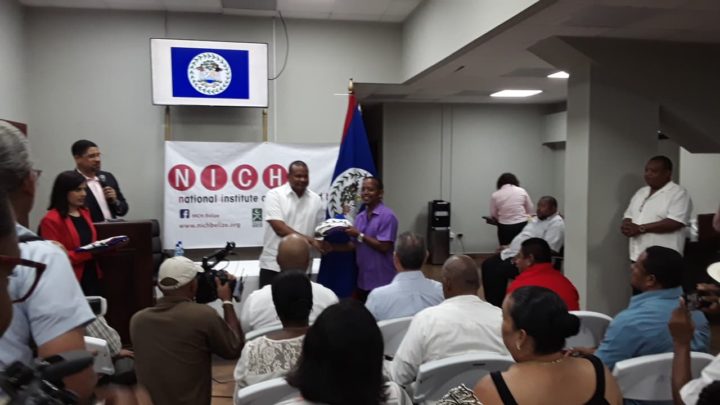 By Aaron Humes: It has been the official and endorsed standard flag of Belize since Independence in 1981, but there has been some controversy over what it is supposed to consist of.

Since 2015, an official committee has consulted and developed the history of the National Flag of Belize and its findings were unveiled this morning at the Marion Jones Sporting Complex.

Developed by public officers Inez Sanchez and Everal Waight, the original flag was royal blue with the coat of arms in the center (the red stripes at the top and bottom were added immediately before Independence to show unity). Its prominent feature is two working men intended to represent the leading ethnic groups of Belize – the Kriol and Mestizo – accompanied by their tools.

The refreshed flag makes subtle changes, according to Nigel Encalada of the Institute for Social and Cultural Research. The axe carried by one of the men is properly argent, or silver, instead of blue, and the background of the ship at sea is corrected. And most importantly, the men are distinguished in their skin colors – one light brown and the other dark brown.

The new specifications and a protocol for observance are to be enshrined in law shortly, and a six month period is to be observed to phase out the previous versions of the flag.

A public education campaign will be held before the legislation is passed, but it already has bipartisan support.