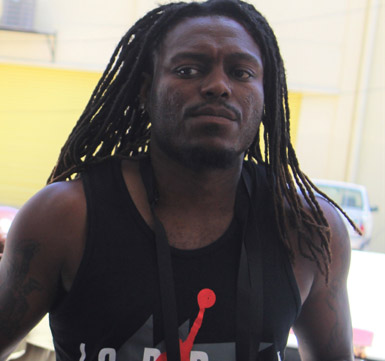 By Aaron Humes: Last year more than 1 million cruise ship passengers visited Belize, and as many, if not more, are expected this year.

While most of them manage to enjoy their brief stay in the Jewel, a few run afoul of the law.

Security guard Brian Keith Gibbs of Yonkers, New York, immediately north of New York City, is on his way back to America after pleading guilty to a charge of assault of a police officer during an altercation Thursday afternoon at the Tourism Village on North Front Street.

Gibbs, 39, is accused of pushing Special Constable Alford Castillo in the chest after being seen acting “disorderly” and being asked to calm down by Castillo and his comrade, one Aguilar. Castillo quickly restrained Gibbs by holding his hand and called for backup.

Appearing before Senior Magistrate Tricia Pitts Anderson, Gibbs was worried about being sent to jail but the jurist said she would consider certain factors once the information on the case was presented.

Gibbs told the court that there was a “heated moment” which escalated because he did not know what was happening, without giving details. But he insisted that he has respect for the law.

The Senior Magistrate set a fine of $500 which was ordered to be paid immediately, in default three months’ imprisonment, but a trip to a nearby ATM resolved that issue. He was then asked to arrange with the U.S. Embassy to reunite with his family, who were with him on board a Carnival Cruise Lines ship.