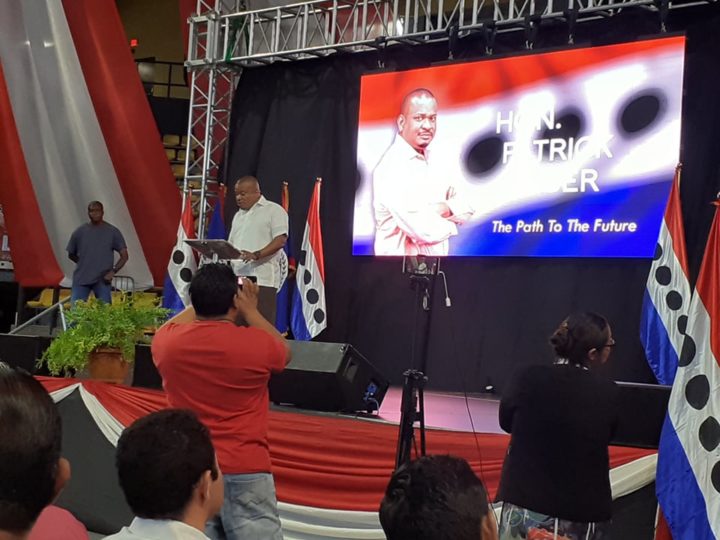 By Aaron Humes: Still one of the youngest area representatives and Ministers in both Belizean and party political history, Patrick Faber, 41, is preparing to make even more history.

This afternoon in his largely safe seat of Collet at the Civic Center, the Deputy Prime Minister and Minister of Education and first United Democratic Party Deputy Leader set his sights on the offices his boss Dean Barrow currently holds – leader of the UDP and Prime Minister of Belize.

Faber first rose to prominence when he retired a People’s United Party stalwart Remijio Montejo in 2003, gaining final revenge for mentor Faith Babb. His name became publicly known in 2005 during the unrest surrounding the Musa administration budget and public utilities and corporation woes, and in 2008 on the back of a UDP landslide, he was selected to manage the country’s education and youth portfolios. He also served a term as party chairman.

Despite a few public missteps (the most recent being apparently speaking out of turn over the write-off of funds for a son of the Cabinet Secretary which he appeared to oppose), Faber looks the seeming favorite against Belmopan honcho John Saldivar when the party meets next February at the Civic.

But today was about launching “The Path to the Future” – Faber’s vision of what Belize will be in the next few decades or so.

According to Faber, despite his relative youth, his aim is to ensure that everyone enjoys the spoils of Belize’s vast resources and is able to live according to their means.

He was supported by several current Ministers and standard bearers from Belize City and across the country, but the Prime Minister, usually a staple of these events, skipped this one, repeating his intent to be neutral in this most critical of races. The party is yet to decide whether P.M. Barrow, in his final term, leaves shortly after the convention to give his successor some months to take the reins ahead of the next general elections, or as has been previously agreed, leads the party into those elections and then hands over after the results.