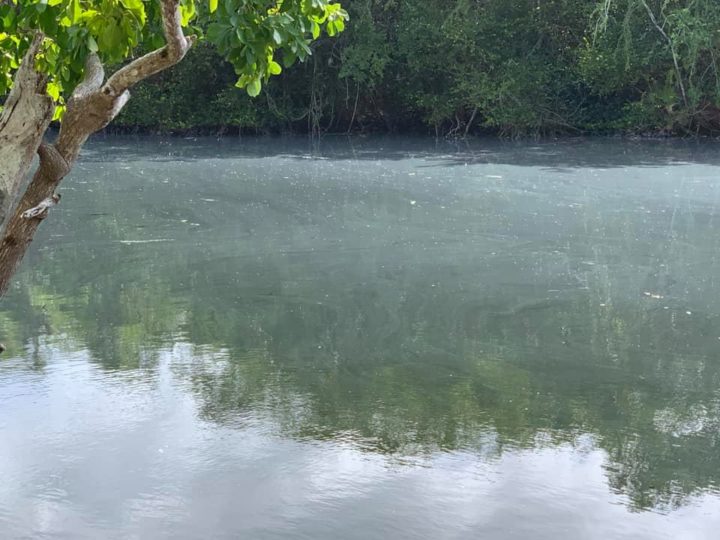 By Richard Harrison: Citizens of Orange Walk and San Ignacio have been expressing grave concern about the deteriorated state of the New River and Macal River, respectively.

The annual “dry season”, which normally runs from February to May, is still underway…and meteorologists are now using the word “drought” to describe this unusually, much-extended dry spell.

The rains that usually replenish the watersheds stressed from the dry season have not come as normally expected…exacerbating the negative effects of increased concentration of pollutants on all our fresh water systems…indeed many creeks, ponds and several rivers have all but dried up!

The New River takes the brunt of the factory and agricultural effluent run off from the sugar industry, which is the mainstay of the mono-culture economy of northern Belize. It is also under pressure from other smaller industry’s wastes…from deforestation for crops and ranching, water extraction for irrigation, river bed mining impact and the growing volume of grey and black water run off and solid waste garbage washed down from rapidly expanding populated areas.

The New River, which normally looks dark green and rich with birds and wildlife now appears dirty brown with a white frothy scum on top…large fish kill and a lot less birds and wildlife have been noted…and it is giving off a foul, rotting-bagasse-like pungent smell into the air.

The Macal River is being affected by two upstream dams, where large forested areas were flooded and is now rotting and producing large amounts of organic material flow…it is also affected by agricultural run off, tourism-generated liquid waste, mining of the river bed for stones and sand…as well as increased volume of grey and black water run off and solid waste garbage washed down from rapidly expanding communities, whom depend on open-pit latrines and individual household septics and soak aways…effluent of which runs through open drains direct into the river.

The Macal River is growing algae and producing a scummy froth on its surface making it generally unpleasant…a dark green moss growing over the base rocks…so much so that much fewer people are using it to swim…and one no longer even think of drinking the water, as many did in years gone by.

It is obvious that Belize’s fresh water system is under duress and cannot now stand up to a mild drought…imagine if there was a severe drought?

The cause of the drought is irrelevant and out of our control.

We must take responsibility for what is under our control…our human behavior.

Water is a sufficiently valuable resource which we have in relative abundance…and which we have been taking for granted for a very long time…like an abusive husband beating his wife for no reason, soon his food will be poisoned…we need to stop the abusive pollution and start paying dedicated attention exclusively to preserving and conserving our water resources…. to maintain them in optimal quality for the long haul…by establishing a national, broadly-funded, semi-private Belize Clean Water Commission, with some NGO characteristics…which would be responsible for harnessing know-how and resources, both locally and internationally, for a comprehensive, integrated approach to prevent further pollution and to rehabilitate those waters that are in a deteriorated state. It should update our laws that govern the management of our watersheds…and enforce them evenly across the board. It should be able to engage in cooperation efforts with similar organizations in friendly countries such as Mexico, South Korea and Israel, who have extensive experience in rehabilitating polluted areas.

For example, Belize has a 66ft waterfront riparian forest protection law that has been grossly neglected for many years…and which needs to be strictly enforced from spring sources to the sea…but no organization is currently legally responsible for its oversight, measurement and enforcement.

San Ignacio used to have several year-round streams running through it…the three-mile stretch to Bullet Tree village had three bridges that had year-round creeks running under them…these have all dried up over the past 20-25 years because we denuded the waterfront riparian forests that protected these creeks and kept them living. Alas, they are now dead! And this scenario can be seen in other watersheds across Belize!

The rains will soon come…the pollutants will be diluted…and their negative effects eased…lulling the lazy, careless, irresponsible and ignorant into complacency and inaction…the current sense of urgency to tackle these problems will “blow over like a lee breeze”….and the negative impact we are having on our own water supply will get worse every year.

Belize will be better off if we heed the warning of mother nature long before she is forced to unleash her wrath on us as punishment for our delinquency, misuse and abuse.

The people need to demand the establishment of an optimally funded Belize Clean Water Commission today….the leaders of Belize should take initiative and not need to be pushed to do what is in the obvious best interest of Belize and Belizeans.

Fly-by-night, ketch-fever, inconsistent riverside garbage clean up campaigns will not cut it…the causes are much broader and systemic…band-aid, superficial activity for petty political optics, playing footsie with the status quo, while maintaining the root causes of the largest contributors to pollution and disabling a comprehensive, integrated approach to prevention of pollution and rehabilitation of our water resources would be disingenuous, hypocritical and downright despicable.