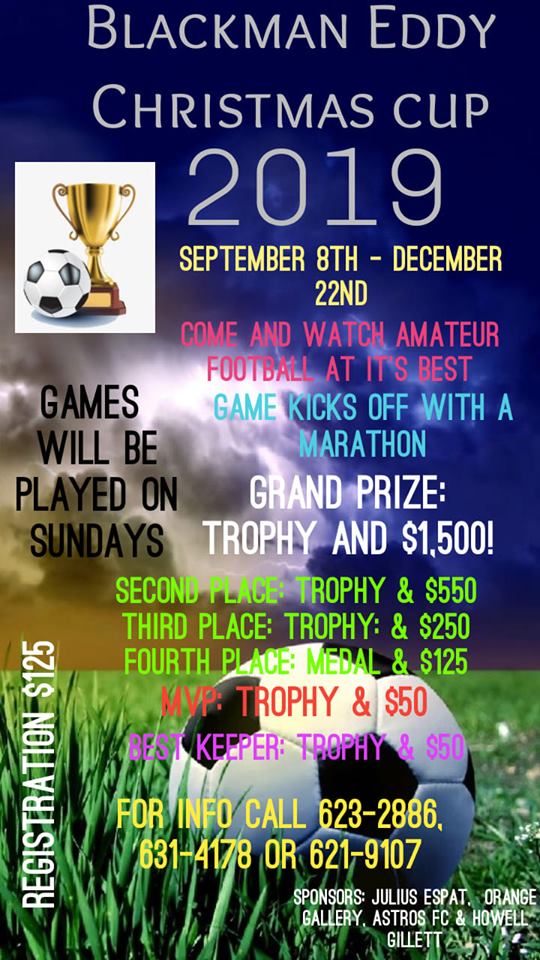 By Aaron Humes: The Jaguars’ match with Grenada will not be the only football in town on Sunday – not even in the Cayo District.

That’s because the annual Western Region Christmas Cup tournament will kick off in the village of Blackman Eddy, about ten miles west.

We spoke to organizer Aaron Swift this evening. He says twenty teams will participate but faces a bit of a challenge getting the number down from the 26 teams showing interest.

Every village from central and western Cayo and even the Coastal Road will be represented.

Swift told us he first organized a tournament nine years ago to support his four sons, all football players, and has done a tournament twice annually starting around Valentines’ Day and in September, running to December. He has also organized special Easter Time and knockout tournaments.

The 20 teams are subdivided in two groups and play round robin with the top four from each group advancing to the knockout stage. A champion will be crowned on December 22, three days before Christmas.

Swift emphasizes that the tournament will be amateur level, 14 years and older, come one, come all except for Premier League players (though they can coach and organize). He says he wants to give all the youths of the Cayo area a chance to grow and succeed in the sport.

He also emphasizes “clean football” – no smoking, swearing, drinking or bad behavior on or off the pitch.