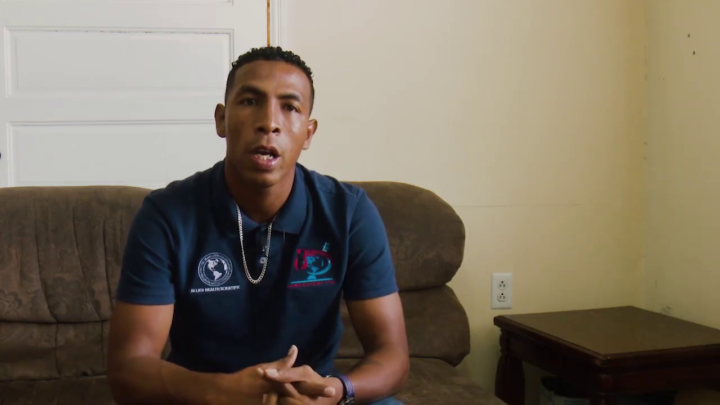 By Aaron Humes: Ahead of Sunday’s big game against Grenada, the debate rages on: Is the Football Federation of Belize (FFB) to blame for the loss of the first potential three (3) points this week after it was unable to get the national side to French Guiana for Thursday’s match.

Captain and chief goalkeeper for the Jaguars, Woodrow West, has spoken out against the Federation to TNC10’s Accion Deportiva. He said he and the team feels “disrespected” after preparing for three months, only to lose out without appearing on the field, and that the FFB’s “excuses” are simply that – excuses.

“The guys were ready to play this game and we just lost three points easily, without playing. And to any player, you could ask them personally how you feel for losing three points. In a regular match, you lose three points, you feel bad; me personally, [I] don’t sleep at night when I lose three points, and we did it yesterday. I was embarrassed and I didn’t report to training yesterday, because I didn’t want to share my negativity with my teammates, because they don’t have the fault in it,” West said.

He revealed that for tournaments like these, FIFA asks for a list of 30 to 40 registered players, each with a valid American visa. About half the team, he said, doesn’t have American visas, but there are alternate routes to reach French Guiana. (FFB President Sergio Chuc has told us that only one airline flies into the French dependency.)

While West’s candor has been applauded, some, like former national team coach Leroy Sherrier Lewis, say he should have kept his mouth shut. Lewis believes that the team should show a united front and leave any questions to current coach Vincenzo Annese. He also suggested that not all National Team players agree with West’s stance.

Either way, West says that after a first-ever such forfeit, Belize must regroup from its disappointment and perform for home fans two days before St. George’s Caye Day. According to West, the Jaguars are eager to get those three points back and take it all out on the visiting Spice Boyz. He mentioned that Belize has played several home games in international tournaments and never lost – but there are a few blemishes on the record including a 2-1 defeat to Guatemala in September of 2014, and a 4-1 defeat to Grenada in November that year, both during World Cup qualification.

On the line is a chance to advance to League A of the CONCACAF system, and improve rankings for next year’s World Cup qualification process.

Game time Sunday is 4 p.m. at the Isidoro Beaton Stadium. BBN will be there with updates throughout the match.