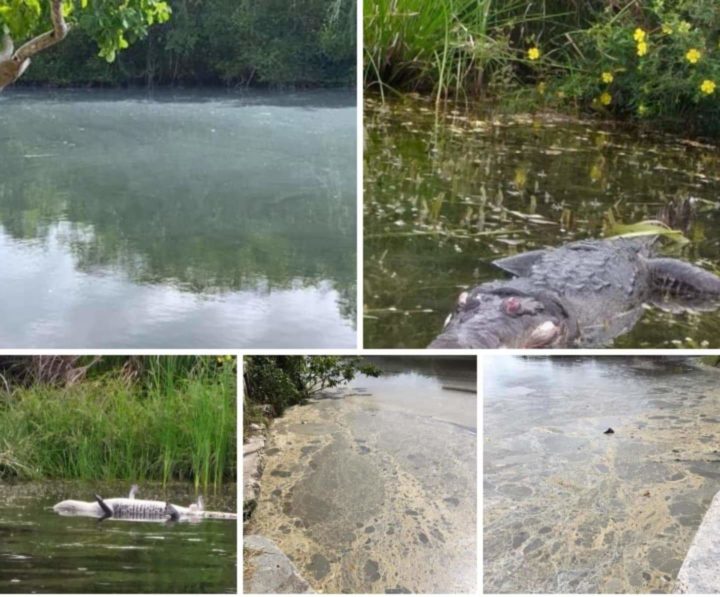 By Aaron Humes:  Once, Orange Walk Town and its surrounding communities was proud of the New River flowing past town, backdrop to the Lamanai Maya monument and many a picturesque day out.

These days, the river is literally making everyone in town sick, due to the buildup of industrial gases and chemicals dumped in it, exacerbated by an ongoing drought and other issues.

We visited on Friday, about a month after first touring the river, to follow up on how Sugar City is coping. In a few words, not well.

Resident Giovanni de la Fuente told us he can’t spend more than five or ten minutes with the windows open at his riverside home before catching a headache, and his throat itches. Others we met in town concur.

For students of the town’s largest primary school, La Inmaculada Roman Catholic, the stench in the very first week of classes brought them to a halt on Thursday and Friday.

Carlos Luna, assistant local manager for Roman Catholic schools, says the school is a literal stone’s throw from the riverside, and he made a personal visit during orientation classes last week Friday, observing the stench and color for himself.

Along with asking La Inmaculada management to keep an eye on the situation, he got in touch with the governmental authorities in Health, Education and Environment.

By Tuesday afternoon, multiple cases of students vomiting, catching headaches and related health issues were coming to the office and on the advice of the Orange Walk Public Health Department, classes were canceled.

Now, the school has worked up a plan to be implemented if necessary, next week if the tests by DOE and Public Health confirm it is not safe to stay on the school compound.

Standard Six students would meet in the MOE conference room; Muffles College would host the Middle Division and NEMO would host the Infant Division at its office in town. The plan is subject to approval from Roman Catholic schools management and the Ministry of Education.

The assessment done Tuesday evening, according to Luna, was mostly observation in the compound and talking to school authorities, but no tests were done on the river itself, though he notes that DOE would have installed its equipment in the area on Friday. Open to question is how the health authorities would consider reversing its earlier decision if it looks to them that the smell is not as bad.

The assessment, Luna told us, also affects schools in the greater Orange Walk area under Roman Catholic management, which includes San Jose Palmar and San Estevan R.C. among others.

But the school is also incorporating this issue into classes in its upper division, though a solution has already been described as taking some time.

Along with health issues, de la Fuente counts the economic and social costs, noting that tourists have been driven away from doing river tours to Lamanai and elsewhere, and businesses along the riverside – one of which drew two customers in a single day – have been losing big.

Both de la Fuente and Luna call on authorities to move more vigorously to identify and begin to alleviate the issue, and restore “Sugar City’s” relationship with the river.