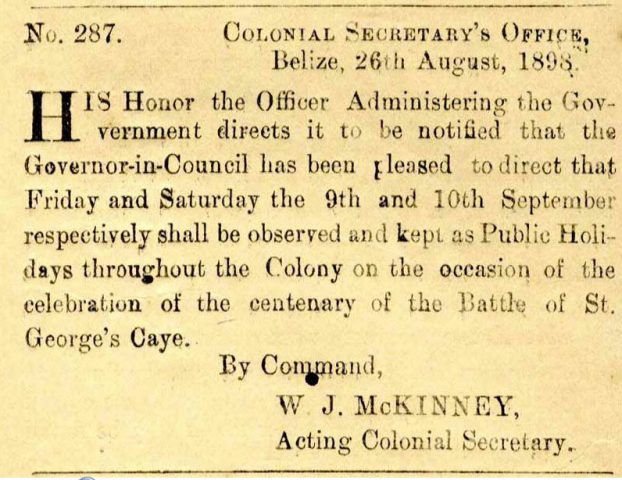 By BBN Staff: September 10th marks the anniversary of the Battle of St. George’s Caye in Belize.

In the 1500s, the Spaniards made constant attempts to control the region of the Yucatan coast, which included the country of Belize.

Known as the Baymen, this group of pirates, buccaneers and adventurers began to cut logwood in Belize for export to Europe.

Repeated attacks by Spain to reclaim sovereignty occured, resulting in treaties between England and Spain, allowing the Baymen to continue their trade.

The Baymen were then forced to to defend their tiny settlement against a Spanish invasion of 32 ships carrying 2,000 troops and 500 seamen on September 10, 1798.

Heavily outnumbered and against the odds, the Baymen achieved a decisive victory.

The Battle of St. George’s Caye, was the last attempt made by the Spanish to control Belize.

Tomorrow, September 10 is celebrated as a national holiday.

The historical significance of St. George’s Caye has been immortalized on Belize’s five-dollar bill which depicts a map of the island.

Festivities include an official ceremony on the eve of September 10, with fire-works, cultural presentations and address by mayors, area representatives and historians.

On September 10, a colorful parade with floats depicting the national symbols of Belize and colors of the Belizean flag is held.

A student parade is done by primary and high school students.