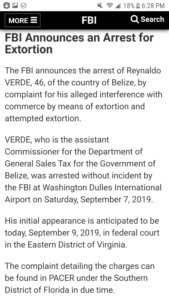 By BBN Staff:The United States Federal Bureau of Investigation (FBI) has issued a statement regarding the arrest of Reynaldo Verde for extortion.

” The FBI announces the arrest of Reynaldo Verde, 46, of the country of Belize, by complaint for his alleged interference with commerce by means of extortion and attempted extortion,” the statement said.

In addition, the statement listed Verde’s post in Belize as the assistant Commissioner for the Department of General Sales Tax for the Government of Belize.

Verde was arrested without incident by the FBI at Washington Dulles International Airport on Saturday, September 7, 2019.

The complaint detailing the charges can be found in PACER under the Southern District of Florida in due time.
Customs and Border Protection assisted during the arrest.

“The FBI continues its investigation,” the statement ends.