Man dies after falling from building in Belmopan 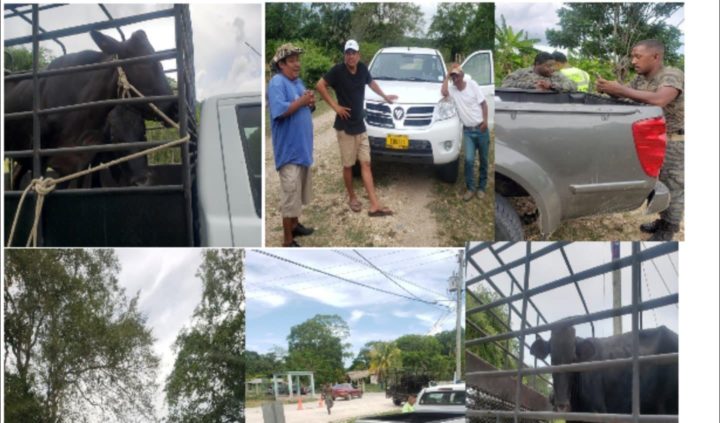 By Aaron Humes: The Belize Livestock Producers Association (BLPA) had to intervene in a case of unauthorized cattle movement in western Cayo District on Tuesday.

A police special patrol unit in Calla Creek on Tuesday morning found cattle transporter Oscar Burgos leaving the farm of Rolando and Noel Uck with four heads of cattle, which he said he was going to weigh nearby.

But Burgos upon request could not produce his movement permit under Statutory Instrument 77 of 2001.

As such, the police contacted BLPA and the Belize Agricultural Health Authority (BAHA). By the time authorities arrived at the scene, the farmer had already released 2 animals without ear tags from the vehicle. Only two animals remained in the pickup truck — one with ear tag and the other without ear tag.

All were informed of the following offence that they committed:

A person who contravenes the regulations commits an offence and is liable on summary conviction to a fine of two thousand dollars or to imprisonment for one year or to both fine and imprisonment.

The pickup truck was then taken to BLPA Bullet Tree check point escorted by the Special Patrol Unit, BAHA and BLPA. The transporter and farmer agreed to pay a fine of $2,000 each and had the case settled out of court.

BAHA collected a total fine of $4,000 and issued a document to the Special Patrol Unit in order for them to release the transporter’s pickup truck. BLPA’s Authorized Local Agent tagged the animals that had no ear tag, issued movement permit for animals to exit the country and suspended the transporter’s card for Mr. Oscar Burgos.

BLPA reminds farmers that NO cattle should be moved for export or from one farm to another without an official ear-tag and a movement permit.