Murder suspect out on bail for alleged gang membership 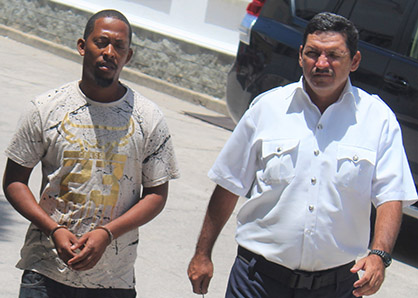 By Aaron Humes: Charged last week with alleged gang membership, 32-year-old murder suspect, Troy Dion Hyde, is out on bail of $5,000 from the Supreme Court.

He was previously accused of the murder of Kareem “Robbery” Lopez and is now accused of membership in the Long Beach Crips gang.

Police since the middle of the year have been bringing alleged gang members to court on this specific charge, some of whom have pleaded guilty. Others who have denied such membership are remanded awaiting opportunities to apply for bail.

Hyde’s attorney Norman Rodriguez had to spar with the Crown, which heavily objected to bail, citing the serious charge of murder for which he is already out on bail; the level of evidence which they claim to have, but have not yet presented; and that Hyde has other charges pending before the courts.

But Rodriguez argued to Justice Colin Williams that the murder charge is separate and apart from any other charges; there is no specific date on which Hyde is alleged to have violated this law; and police have not provided evidence to back up their claims that the LBC are engaged in criminal activity and that they have surveilled the group, including Hyde.

Rodriguez also added that the Crown claimed they did an antecedent check on Hyde and wanted the court to accept that since his client had some charges pending before the court, although no conviction, as reasons for denying his client bail; but this is no reason, he argues, for denial of bail and no list of the charges was provided.

Justice Colin Williams ordered that the conditions to his bail remains the same as the ones he was presently out on bail for on a charge of murder, which is to say he must stay away from prosecution witnesses, attend police and court dates and avoid further incidents.

Attorney Rodriguez commented that police must fully investigate this type of charge before nabbing suspects to avoid any issue of bias and grudges, for instance an officer who cannot bring down a suspect for specific crimes using this law to get them off the streets (pleading not guilty sends them to jail unless they can apply for bail). It is also noted that while a guilty plea results in a maximum fine of $3,500, it does not preclude police from charging an individual again if they believe they continue to be a gang member. According to Rodriguez, many of the clients he has had in the past pleaded guilty only so they did not have to go to jail.