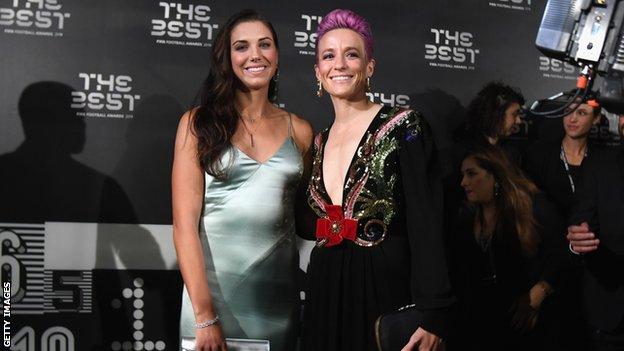 By Aaron Humes: U.S. World Cup Golden Boot winner Megan Rapinoe has called on fellow footballers to use the game they play for a living to change the world, after being acknowledged as FIFA Women’s Player of the Year.

The 34-year-old beat out fellow American Alex Morgan and England star Lucy Bronze in that order to claim her first award at the first time of asking.

Rapinoe’s six goals including the opener in the final paced the Stars and Stripes to their fourth world title, but most of her headlines in the last year came off the field.

Rapinoe and her fellow U.S. stars are at loggerheads with the U.S. federation over equal pay, and she pointedly snubbed President Donald Trump after he called her out for saying she would not accept a visit to the White House.

At the award ceremony in Milan, according to the BBC, Rapinoe stated, “Some of the stories that inspired me this year are [Manchester City forward] Raheem Sterling and [Napoli defender] Kalidou Koulibaly – their incredible performances on the field and their reaction to the disgusting racism they have to face, this year but probably for their whole lives.

“I feel like if we really want to have meaningful change, what I think is most inspiring would be if everybody other than Sterling and Koulibaly were as outraged about racism as they were.

Other winners included Rapinoe’s coach, Jill Ellis, who goes out a winner after announcing she will step down in October; Dutch goalkeeper Sari van Veenendaal for the inaugural best women’s goalkeeper, and a first women’s 11 side filled with glittering names.

The U.S. and Brazil have dominated the category over the years, with the likes of Marta, Cristiane, Mia Hamm and others nominated for and winning the award.