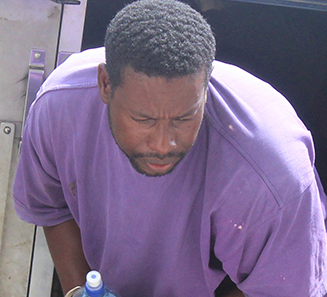 By Aaron Humes: Osmin Martinez, originally from Trial Farm but working in San Pedro as a security guard, appeared in Belize City Magistrate’s Court charged with burglary, theft, and harm against a man and a woman.

On September 22, Martinez is accused of breaking into the home of his ex-common-law-wife whose name we will withhold, causing harm to her, and damaging her stove, a mirror and a fan, and stealing from a man who was also there, his cell phone.

According to Martinez, he and the woman had been going out together, which she denies, and he went to her home and met her apparently having intercourse with the co-complainant, which allegedly caused him to beat her up. The man intervened, he added, and so he had to defend himself, but it is not clear how he got the man’s phone.

He pleaded not guilty to burglary and theft, and Senior Magistrate Tricia Pitts Anderson, presiding, entered an entered an equivocal plea of not guilty for Martinez on the charge of harm.

Martinez made bail of $3,000 and must stay away from the complainants and their relatives. He reappears in San Pedro Magistrate’s Court on November 27.