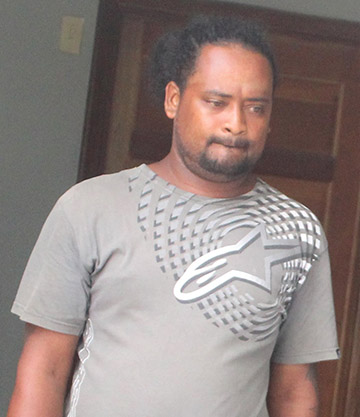 By Aaron Humes: A messenger/janitor with the Ministry of Education pleaded guilty to theft of a purse belonging to pharmacist Alexis Rosado (not to be confused with the Ambassador to Guatemala).

Dorian Polanco is accused of removing the $90 wallet which contained $750 cash and various cards from the house of Rosado’s fiancé on St. Thomas Street, which she was visiting on September 9.

Rosado woke up on the morning of St. George’s Caye Day to find the wallet missing. Polanco, who was cleaning the yard, was the first person she questioned according to the police statement, but he denied any knowledge of the wallet.

But Rosado was told later by a relative of Dorian’s that he was seen spending a lot of money. She called him on his cell phone and he confessed, agreeing to return the wallet; but he never showed up.

Police later recovered the wallet in the back of the yard in a box, but it only contained $250.

In court, Polanco told Senior Magistrate Tricia Pitts-Anderson that he paid $125 out of the money to buy a new phone on a trade-in deal, but that still does not account for the remaining $375.

But it will cost him a lot more, as the Magistrate fined him $1,000 due by January 1, 2020, in default 4 months in prison. He must also by court order repay the money used to buy the new phone.