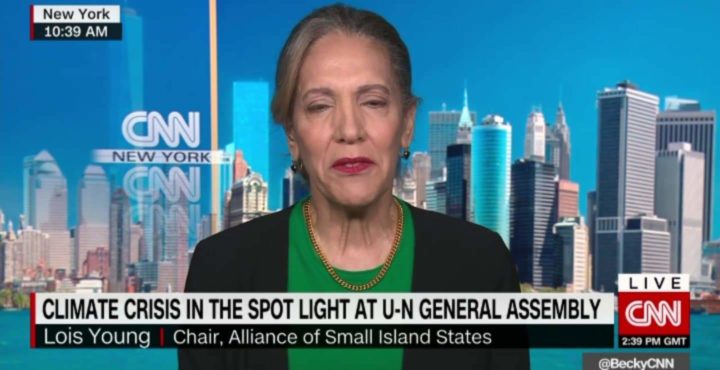 By Aaron Humes: Ambassador Lois Young, Belize’s Permanent Representative to the United Nations and Chair of the Alliance of Small Island Developing States (AOSIS), spoke with CNN International’s Becky Anderson briefly on Sunday, September 29, 2019 about the climate crisis and refugees.

Host Anderson opened the segment on “Connect the World – Climate Crisis” by citing Young’s comments in the Financial Times, “The time for climate denial and incremental action is long over. This is a crisis that affects our security and we call on those blocking on the U.N. to step aside.”

Young told Anderson that the recent UN IPCC report underscores last year’s special report, which cites the risk of “burning the Earth” if we do not heed the call to keep the average temperature rise globally below 1.5 degrees Celsius by 2050. The current trajectory is a rise of 2.5 degrees Celsius or more.

Small islands and states like Belize, Young says, would “lose our biodiversity – we are already losing it – we will have a sea level rise; infusions of the sea into our freshwater supplies, coastal degradation, complete loss of our biodiversity.”
With so many already losing their livelihoods, homes and resources and forced to seek refuge elsewhere, the United Nations 1951 Refugee Law makes no reference currently to “climate or natural disasters,” according to CNN’s Anderson.

Anderson cited the Internal Displacement Monitoring Center, which measures as many as seven million displaced in the first half of 2019 due to extreme weather, with as many as 140 million at risk by 2050 according to the United Nations.

Young agrees that there is no such status as “climate refugee” and cites a case from a few years ago in the U.S. where a petition for such was denied. She also mentioned the recent displacement from the Bahamas caused by Hurricane Dorian. Many of those who went to the States could be classified by the term.

“I would dread to think that we would reach the point where we had mass migration because of that, but it is a possibility,” Young concluded.
Belize is a signatory to the Paris Agreement but several large states including the United States have backed out due to local pressure.