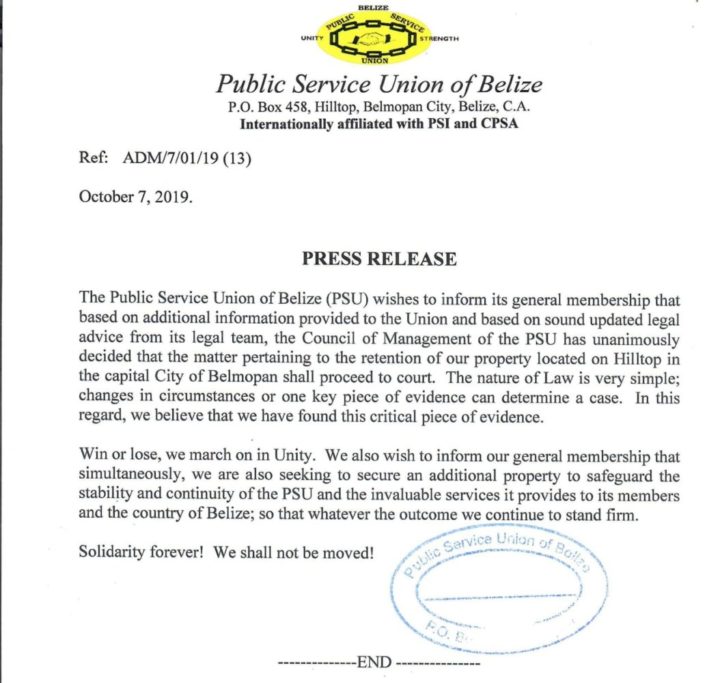 By BBN Staff: The Public Service Union (PSU) announced this week that it will be mounting a legal battle against the Belmopan City Council for the property in Belmopan which houses its headquarters.

The PSU announced by way of a release to its membership yesterday that its Council of Management unanimously decided to seek court action after a meeting with their legal team. The decision came after a discovery which seems to have galvanized the union’s belief that they can win in court.

“The Law is simple; changes in circumstances or one piece of evidence can determine a case. In this regard, we believe that we have found this piece of evidence. Win or lose, we march on in unity,” the PSU said.

The union also noted that it is still seeking to acquire an additional piece of property to ensure the continuity and stability of delivering its services to its membership.

The PSU had occupied and leased the Hilltop property for almost 20 years when the Belmopan City Council sold it in 2018 to Simplex Design Company Limited, a Corozal-based company owned by  Asian businessman Xin Ni. The PSU has initially sought court action against the Belmopan CitCo and Mayor Khalid Belisle when Prime Minister Dean Barrow intervened to see if the union could regain the property. The sale was reportedly for $400,000.