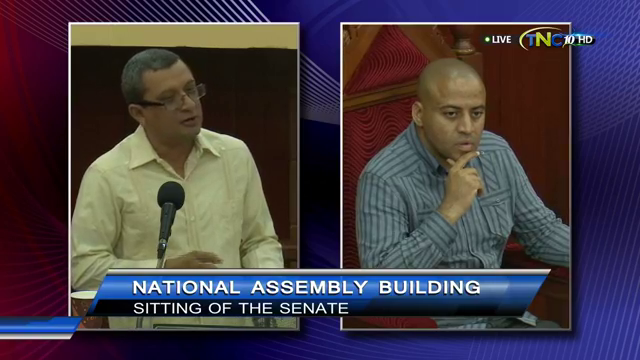 By Aaron Humes: For only the second time in its history, the Senate voted down a piece of Government legislation when it defeated Write-Off (No. 2) Motion in favour of Joshua Perdomo, 7-6.

While it is procedural that all motions and bills come from the House to the Senate, under the Finance Orders, the House’s approval of a motion such as this one stands even if the Senate votes no, according to Attorney General (A.G.) Michael Peyrefitte.

It is not true, according to Senator for the NGO community Osmany Salas writing on Facebook this morning, that in the A.G.’s words, “the Constitution says that any money motion or money bill that goes to the Senate even if the senate rejects it, it passes through in any event. If it was not a money bill then there is a month delay.”

The Constitution takes no notice of motions, says Senator Salas, and only speaks to what happens to Bills: a Money Bill would still be presented to the Governor General under Section 78 (1) for his assent; and any other bill must wait six months before being presented to allow time for consideration and potential amendment.

He adds that the Constitution does not state that the membership of the Senate (“thirteen people who are appointed”) cannot override that of the House (“thirty (-one) people who are elected”), citing what happens with non-Money Bills.

According to Salas, “The irony of the situation is that the Write-Off Motions may not have needed to go to the Senate because the Financial Orders only require approval of the House of Representatives for the writing off of what the Government considers to be “any irrecoverable advances” or “abandoned claims” where the amount in any one case exceeds $10,000.”

The other write-off motions for losses of vehicles were passed without objection.

One Money Bill has been defeated by the Senate – the PACT (Amendment) Bill of 2017, under the same scoreline of seven-six. In that case the Government followed through with getting the Governor General’s assent under the same conditions raised by Peyrefitte.

But the point, said Business Senator Mark Lizarraga, was made: “I was proud that majority of Senators stood on principal in saying that we need to protect the people’s asset. We need to ensure that everybody has an equal opportunity. There are so many students that owe for their education loan. There are so many people that would love to have an education loan or to be sent away to study. At the very least these people have an obligation to come back and if they don’t come back certainly to pay for their loan. And again it is unfortunate because especially given that position of that person’s father who sit in Cabinet. It just sends a wrong signal. A valid point was made that you had somebody that made guarantee and that the government should have acted well before now to make good on that guarantee and collected from the guarantor if they couldn’t find the principal.