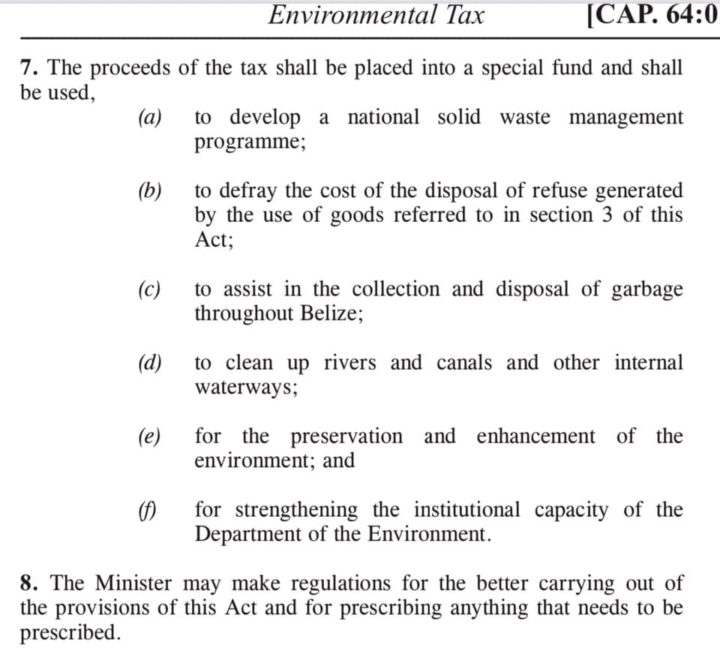 This year the Government will collect around $42 million in Environmental Tax.

It has collected over $400 million in Environmental Tax since 2003.

Section 7 of the law states “the proceeds of the tax shall be placed into a special fund”.

From the outset these revenues did not find their way into no “special environmental protection fund”, but rather goes directly into the consolidated revenue.

Therefore, GOB is in breach of its own law….and needs to most urgently correct this breach by establishing the “environmental protection fund” with provisions for its proper multi-disciplinary management, accounting, auditing and reporting…if it wants to avoid a class action suit by affected citizens of Belize.

Section 7 goes on to list 6 specific uses of this “special fund”…which include:

D.to clean up rivers and canals and other internal waterways

E.for the preservation and enhancement of the environment

If this $42 million fund is divided equally among its legal uses, then each use should be apportioned $7 million and there should thus be $14 million annually for the two uses listed above….which can afford multilateral loans of up to $275 million…which should be for the purpose of building appropriate infrastructure, capacities and capabilities to end direct municipal, agricultural and industrial pollution of our waters.

We are alarmed to these facts especially since this year Belize has experienced a much longer than usual dry season…categorized by meteorological experts as a drought…causing an exacerbation of the undesirable effects of concentration of pollutants due to lack of dilution from rainfall….with the New River and Macal River choked up and struggling to support life….and some smaller creeks and rivers, like Caves Branch River, simply dried up.

The past two weeks have brought some rains…but not nearly enough to dilute the polluted waters and return them to “normal” life.

Many are tempted to evade or avoid this crisis on our water resources once the rains wash away the nasty smell, the ugly color, the killed fishes and wildlife, the thick algae and moss growing on the river beds…and sickened students and teachers get back to normal life in the classrooms….HOWEVER, the alleviation of negative effects by the rains is no reason for Belizean’s to let down their guard…this situation will repeat itself and get worse each year if we refuse to clean up our act and END the direct pollution of our waters once and for all!

With sufficient rains the internal waters will get a breath of fresh air…but that means that the pollution will have been washed down to the sea…where its growing accumulation will increasingly wreak havoc on Belize’s most valuable natural asset…The Great Belize Barrier Reef…and all its related marine life.

Belizeans…we must break this trend we are on…one of an increasingly lawless society…where even the Government of Belize willfully and intentionally, or otherwise, breaks its own laws.

GOB…do the right thing and implement the Environmental Tax Act fully…and add the provisions suggested above.

Let us unite to return ourselves and Belize to a peaceful, law-abiding society and government…starting with righting our wrongs as they relate to the Environmental Tax Act.

Let us together create the New Belize of our dreams…join the Belize Citizens Committee today.