Minister of State denies “special favor” for Columbus U. in immigration case 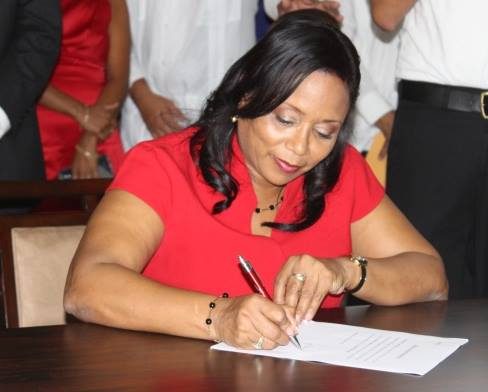 By Aaron Humes: Minister of State for Immigration, Beverly Williams says she did not countermand her retiring Director of Immigration, Diana Locke, when she advised last week that charges against 21 students of Columbus Central University in Ladyville be dropped and their passports returned.

The University has been in the spotlight for accusations of being a “diploma mill” and a front for trafficking in persons and other alleged illegal activities under the former name of American Global University School of Medicine, charges it denies.

The group were charged after it was found that their fees for permits allowing them to stay to study in Belize had not been paid and that the school was holding on to their passports.

The charges were not dropped immediately despite the sitting Magistrate’s admonition to settle the matter out of court, and when they eventually were last week Monday, the Director made clear she was only doing so at Williams’ orders.

After Friday’s House meeting, Minister Williams told Channel 7 News’ Jules Vasquez that she first learned of the issue from the officer in charge at Philip Goldson International Airport, and that school administrator Peggy Allen later called, attributing the problem to undescribed “administrative glitches.” Further, according to Williams, the department may simply update the stamp rather than issue a new permit. She therefore advised that they collect the revenue, in excess of 40 thousand dollars and warn that any further issues would necessitate court action.

But when the Department went back to court against the Minister’s advice, they were, according to her, scolded by the Magistrate for not settling the case and Williams wrote to Locke instructing that the case be withdrawn; she would not comment on Locke’s statement to the court.

According to Williams, the students were accounted for and it was directed that once the fees had been paid, the stamps should be updated and the passports returned. She acknowledged that holding of passports is a common feature in trafficking of persons, used to ensure that they cannot escape and be identified, leading the trail back to the trafficker.

Williams concluded that her view was supported by the court and that she considers herself “in step” with the leadership of the Department.