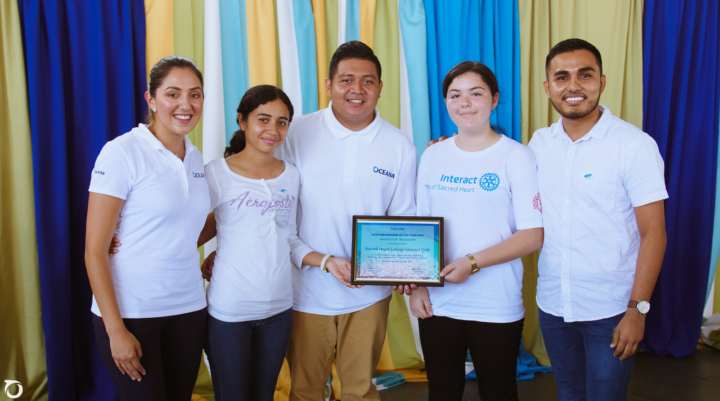 By BBN Staff: Belizeans from across the country gathered at the Saint Catherine Academy Auditorium in Belize City to participate in Oceana’s Annual General Meeting (AGM) of its dedicated volunteers, the “Wavemakers”.

During the AGM, several wavemakers were awarded certificates of appreciation for their sensational, above and beyond support for Oceana’s campaigns and initiatives over the past year.

Oceana also recognized Yvetter Sanker Riverol as the “National Wavemaker Of The Year”.

Riverol is a teacher at the Corozal Junior College (CJC), where she spearheads environmental activities for both her students and community.

She has been volunteering with Oceana for almost ten years, having assisted in the 2011 signature drive that led to the People’s Referendum against offshore oil.

Yvette also helps to recruit volunteers for Oceana by encouraging current and past students to participate in their activities. She is an active advocate for the ban of single use plastics and proudly encourages greener practices around campus.

Yvette is a strong pillar of support for the CJC Wavemaker base and by extension, the entire Corozal community.

Invited guest speaker, Stacey Alpuche, an Environmental Engineer by training with a passion for water quality analysis, wastewater treatment plants and lake restoration, presented on the sources and harmful effects of water pollution, control methods as well as its relevance in our environment today, specifically the crisis currently affecting parts of the New River.

Keynote speaker, Tanya Mcnab-Fields – Creative Director at McNab Visual Strategies and Green Light Ltd., as well as a founding partner of Plastic Free Reefs. McNab-Fields’ highlighted the peril and pervasiveness of plastics and shared that while the scale of use is overwhelming, the response doesn’t have to be. She stressed that personal action doesn’t need to be drastic to be impactful.

Both presentations were followed by engaging dialogue during the question and answer segment.

Belizean Wavemakers are part of the more than a million Oceana members that support the protection and restoration of the world’s oceans.