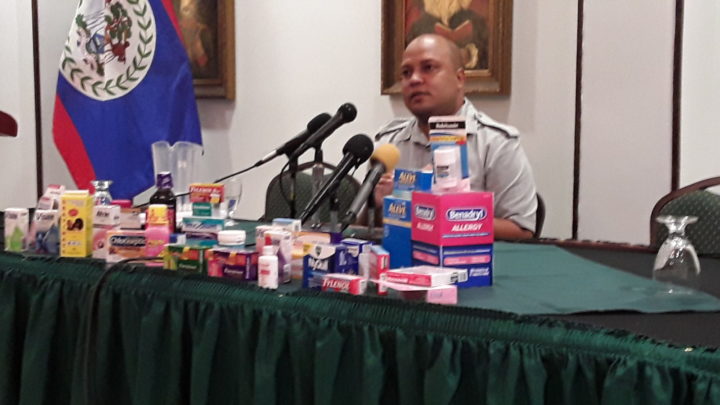 By Aaron Humes: Belize’s Ministry of Health’s regulations for importing pharmaceutical products have proven too onerous, according to activist Geovannie Brackett, forcing pharmacies here to rely more often on “generic” branded products and potentially exposing Belizeans to risky complications from these medicines.

Now he plans to take the fight to get the best medication directly to American authorities. While he continues his research, he plans to write the authorities as early as next week for a response. He hopes authorities will agree to protect their commerce, uphold the right to proper health care and remove the root of any conspiracy in Belize, even saying he would agree to testify publicly in the U.S.

Pharmaceutical importers have traditionally dealt with American and other distributors such as Walmart, Walgreens and CVS, who are approved by the U.S. Food and Drug Administration (FDA) for good distribution practices. But since 2017 the Ministry requires, direct from manufacturers, a certificate for good management practice (GMP)/certificate of pharmaceutical products (CPP)/certificate of analysis (COA) which is more difficult to get. And even with proper certificates and licensing, it takes time to get the goods out of Customs and Excise, where they are not properly stored and run out by expiration date. More than 3,000 medications are imported annually.

The standards imposed on pharmacies by the Ministry, says Brackett, are not being followed at its own Central Medical Stores in Ladyville, where for instance, imported pharmaceuticals are not being stored at sufficiently cool temperatures.

Pharmacists, health professionals and patients have complained and Brackett is calling for an audit and to root out any potential cronyism in the system, as the results are literally a matter of life and death for some.

On April 1, 2017, the Ministry and National Health Insurance advised by notice that five popular pharmacies had been selected to dispense the most commonly prescribed medications under NHI rules and that the medications dispensed are “generic” and come in different styles and sizes than we are used to. Brackett says the effect of this is to seemingly limit the provision to the five – BMA; Southside; Belize Health Care Partners; First Choice Pharmacy and Brodies – and doctors must now adjust to the replacement medications, or do without them in some cases. Nothing indicates who have the tenders to provide the medication and why only to these providers, and the Ministry must reply, Brackett says.

At this point, Brackett told us, the alarm level is “concern” in terms of any sickness in the population, and the Pharmacists’ Association has met on the issue and revealed there is difficulty in getting what they want, but they have yet to come forward formally due to potential Government victimization.

As was pointed out, not all generic medicines are especially less effective, but Brackett made note that the point is quality, which can be cheaper and work more effectively.

It hit close to home for some in the audience at the press conference – Brackett himself is on metformin (used to treat type 2 diabetes), while PLUS TV’s Louis Wade made note that the high blood pressure medication known as “Denk” is scarce and even obsolete even though the Ministry continues to order it.

But Brackett emphatically denied going to bat for “Big Pharma” or particular backers such as Orange Walk’s Geovanni de la Fuente, a noted pharmacist in that area. “My position here is grassroots. It’s the fact that I am a diabetic and I am here. You just see the medication so are you supposed to tell me where I am supposed to get my medication? Who are you, on God’s green Earth to tell me what the hell I am supposed to use? You might want me to use substandard regional products – that might be okay for you, but it’s not okay for me, I want the option.” He said he had deliberately not spoken to De la Fuente for a few weeks while investigating this issue.