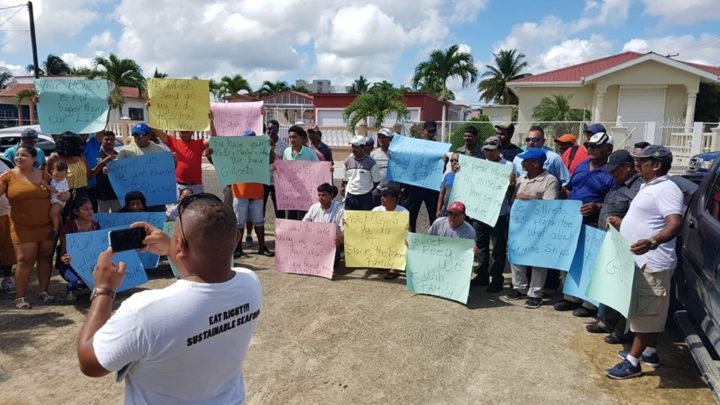 By BBN Staff: The Belize Territorial Volunteers (BTV) issued a statement today stating that it took action on Friday, October, 25 when a group of Guatemalan fishermen attempted to stage an illegal protest in Belmopan.

BTV says that the fishermen entered Belize with total disregard for Belizean laws, which are designed to protect Belize’s borders from this type of invasive action.

According to BTV, the Guatemalans arrived at the Punta Gorda Fish Market in the early morning, by-passing Belizean Customs and Immigration, and boarded a chartered bus to Belmopan where they attempted to stage a protest against efforts to ban the destructive act of gill-net fishing.

“These immigrants, whose entrance into Belizean territory must be viewed as an international threat, brazenly disregarded our authorities and demonstrated disrespect for our laws when they proceeded to express their message to our media by showing their signage to the cameras. After leaving Belmopan, the protesters returned to Punta Gorda by bus and boarded their boats that were waiting at the local fishing cooperative to take them back to Guatemala around 3:00 p.m. This is where the BTV intercepted their boats and videotaped them so that Belizeans can be informed of their wrong doings. A video was made when the chase was taking place,” the group expressed.

The members of the BTV are calling on the authorities who are empowered to stop ‘these intruders’ from entering Belize with their ‘impudent sense of entitlement’, who demonstrate complete disrespect for our protective acts and laws.

In addition, BTV demands that the customs, immigration and fisheries departments conduct a formal investigation into this and the group recommends that licenses to fish within Belizean waters which have been granted to Guatemalan residents be revoked immediately on the grounds of this illegal entrance into Belize and trespass into Belize’s capital.

“The BTV firmly condemns this defiant action!” the statement ended.