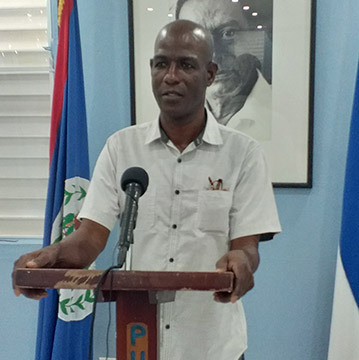 By BBN Staff: Residents in Stann Creek are mounting a petition against the persons chosen to head the Water Boards in several villages, according to Area Representative for Stann Creek West, Rodwell Ferguson Sr.

Ferguson held a press conference this morning, explaining that the representatives of the Hope Creek Village Council began gathering signatures last week and already have over 200 signatures, requesting that the current heads of the water board for that village be replaced with those recommended by the council.

Ferguson said that that the People’s United Party won over 85 percent of the village councils in the Stann Creek District, however, he alleges that the Minister of State in the Ministry of Labour, Local Government and Rural Development, Dr. Carla Barnett, has chosen the heads of the water boards in various villages based on recommendation given by non-elected standard bearers from her own political party.

Ferguson also said that, while he acknowledges the law affords the minister the discretion to select the water board representatives as she sees fit, he feels that she could have, at least, held consultation with himself and the representatives from the village council before arriving at a conclusion.

Ferguson said that there are other villages in the south that are displeased with the list of names issued for the new heads of water boards, which include the villages of Pomona, Middlesex, and Independence.