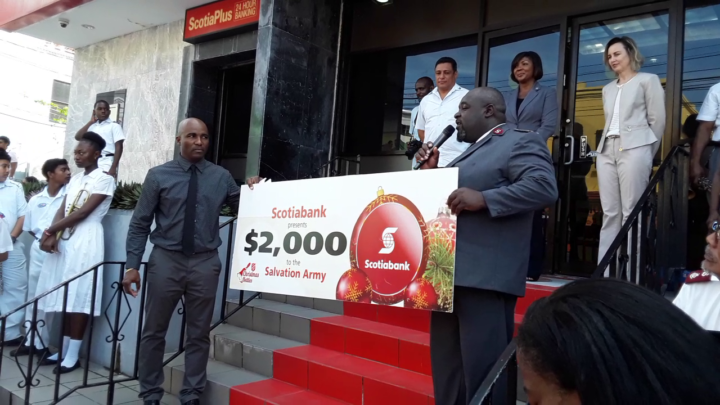 By Aaron Humes: We are less than two weeks from Garifuna Settlement Day, and believe it or not, a month-and-a-half from Christmas.

And the usual harbinger of that “most wonderful time of the year” is the annual opening of the Salvation Army’s Kettle Appeal, named for the red kettles on display in front of major stores across the City but especially in the downtown area.

This year someone new is in charge – Major Jonathan Kellman, taking over from Joliker Leandre as District Commander of the Army, 23 years after his first stint in Belize.

But the usual Christmas carols, Bible reading and appeals to the hearts and minds of Belizeans remain the same.

First in line is Scotiabank, which gave $2,000 at the opening ceremony in front of its offices on Albert Street, with staff expected to give of their own means individually.

Scotiabank Belize City Manager, Erwin Arthurs, told reporters that this is the fourth year of their partnership with the Army and something of a tradition.

“It’s very important, because indirectly this donation will reach people that are our customers, by extension their family members, people that they might really want to give to so indirectly it’s giving on their behalf as well,” Arthurs explained.

Major Kellman points out that their receptions are given out through the hundreds of food hampers given out close to Christmas, and the annual Children’s Dinner for 700 participants at Holy Redeemer Parish Hall on December 6th.

The Army is approaching corporate outlets as well to meet its target of $100,000, both in terms of monies and giving community service on November 23rd and December 14th.

Last year the Army fell about $6,000 short but it is counting on generous Belizeans’ funds – whether pennies, shillings, or paper – to put them over the top.

This year’s locations for kettles, open through Christmas Eve, are Public’s, Brodies and Save-U supermarkets on the Philip Goldson Highway, and Hofius, Brodies and Scotiabank in downtown Belize city.