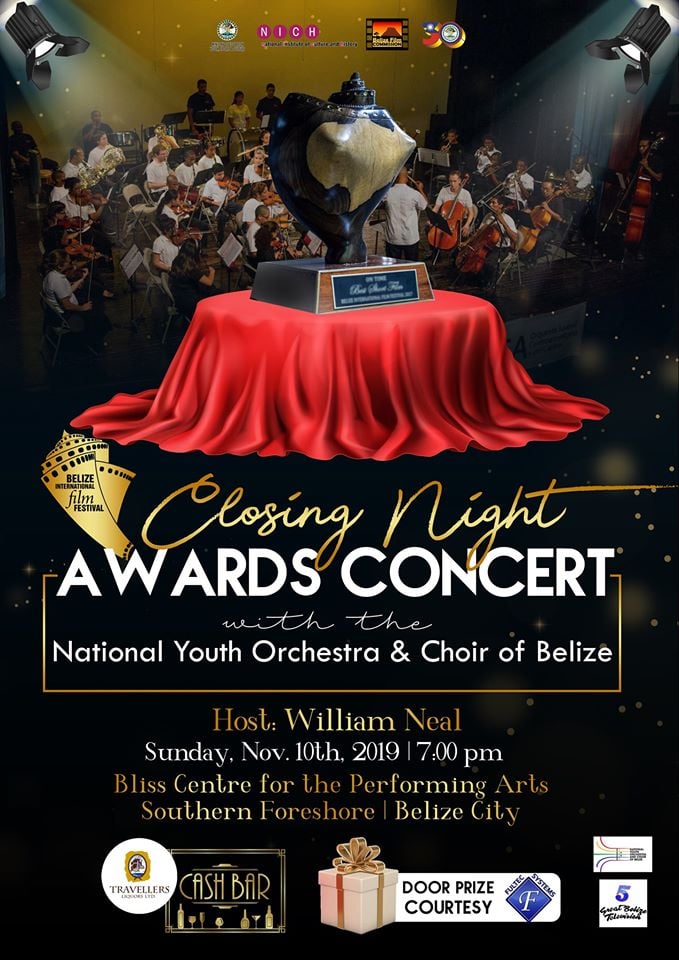 By Jose Sanchez: The 14th Belize International Film Festival (Belize IFF) ends on Sunday, November 10th with a closing ceremony at the Bliss Center in Belize City. Dozens of films, shorts, and documentaries from across the planet have been curated to be shown to a Belizean audience. A special category for local music videos was created to highlight content creators in Belize who do not often get recognition for their craft. That public viewing takes place at Thirsty’s Belize City on Saturday night while a free public viewing of films are showcased also on Saturday night at the Digi Park. While these venues are hoping to attract new people to film, traditional viewing takes place at both the Bliss Center and the Ramada Princess Cinema. Regional movies are highlighted as well as productions that have been done in Belize. HARPOON and MY FATHER BELIZE lead the pack with US and Canada teams while several other films are homegrown.  During the growth of Belize IFF, the Film Commission and the Festival Director have worked on developing the talent in Belize. This year, Belize FMAU Screenwriting Cohort Program was offered to members of the Belize Writers Guild with the assistance of FinalDraft to tutor writers how to adapt ideas and stories into 15 minute screenplays. FinalDraft personnel and filmmaker Chris Pack and the Script Writers Network have assisted with the cohort guided by the Film Festival Director Suzette Zayden. Zayden works extensively with the Belize Film Commissioner Nigel P. Miguel.  Holding back no qualms about the future of the industry, Miguel says “This year’s opening night shows the advancement of the festival, we were able to mesh two cultures and showcase the Belizean Experience in this year’s opening night film. Our young film industry is becoming of age. There’s an old hip hop verse that says “You Can Either Lead, Follow, or Get Out the Way” we choose to lead, The Belizean Film Industry has arrived.” One of the Festival’s guests Mark Ang, flew from Taiwan just to share remarks at the opening night. Ang, a filmmaker, a screenwriter, a film festival organizer, and the founder of Formosa Festival of International Filmmaker Awards, the CEO of the 58th Asia Pacific Film Festival. Since 2014, Mark has been awarded 56 times in different film festivals around the world with his short film “Replace”.

The festival has been a long time love affair for Festival Director Suzette Zayden. Zayden fondly reflects on the start of the journey by saying “When we celebrated the first Belize International Film Festival in 2003, our key objectives were to expose Belizean audiences to films they would not normally see from different countries around the world; and, to create a space where the filmmakers could interact with aspiring filmmakers thereby stimulating the creation of films from Belize and our Caribbean and Central American region.” This year veteran location managers were invited to share with Belize’s talent and those who want to break into the industry. They met during a session at the Princess and along with the film commissioner, they explained that the meeting was only a small part of a three year commitment they have made with the film commissioner to assist in the growth of location scouts and managers. An online seminar is in the works for the near future.   The jurists for this year’s festival are hardworking industry professionals. Natalie Thompson’s international  credits include Line Producer and Production Manager on Cocktail, Cool Runnings, Prelude to a Kiss, Instinct, How Stella Got her Groove Back,  Small island, Knight and Day,  Third World Cop, Ghetta Life and most recently No Time to Die.  She was co-producer and Production Manager  on Sprinter  and Line Producer – Jamaica on the  Idris Elba helmed Yardie . In Television, she has worked as Production Manager on Top Boy and  Marvel’s Luke Cage when they filmed in Jamaica.    Chris Pack is known as a producer and manager of four seasons of HGTV’s hit TV show, Island Hunters (seven of which filmed in Belize).  Chris’ award-winning productions and Emmy nominated productions have aired on networks such as Bravo, Lifetime, Style Network, FOX, USA, TLC, History, MTV, E!, Comedy Central, OWN and the Discovery Channel.  Chris is Co-Chair of the Producers Guild of America Employment committee West and member of The Television Academy. Denise Williams Watts is Head of Video Production at Apple Music/iTunes who leads content across all music related video projects for the US and International. She is the former VP of Creative & Visual Content for Warner Bros. Daryl “Chill” Mitchell who since 2014 has starred in NCIS: New Orleans as recurring-turned-main character Patton Plame, a computer specialist for

NCIS. In 2018, he joined the cast of Fear The Walking Dead portraying Wendell, one of the characters trying to survive the zombie apocalypse.  The Festival has also adopted a social consciousness and part of the sessions include the Green Globe “Fostering a Green Belize in the 21st Century” Panel Discussion. This year’s The discussion focused on Sargassum, the Stony Coral Tissue Loss Disease and the follow up to the Single Use Plastic and Styrofoam Ban legislation and can be viewed at https://bit.ly/2K0UECE Festival Director Zayden goes on to say “Today, 17 years later, we celebrate our 14th edition and there is a clear difference in the filmscape of Belize. There are 13 films and 15 Music Videos that were either made by Belizeans, about Belize or Belizeans or featuring Belizeans in a lead role in this year’s BelizeIFF. The Festival has become the bridge connecting Belizean filmmakers living in Belize and those in the diaspora paving the way for future collaborations. A film legislation will soon be drafted and there is a definite rise in the interest in film as a career option by our youth. While affordable technology has played a role, we at BelizeIFF certainly believe that the Festival has also done its part to nurture the dream of a Belizean Film Industry.”  With continued support from local businesses and the environmental community, the Festival will continue.  But the Belize International Film Festival will reap not only by what is shown during  November but by the educational measures that also take place during the year while the curtains are closed in the theater.