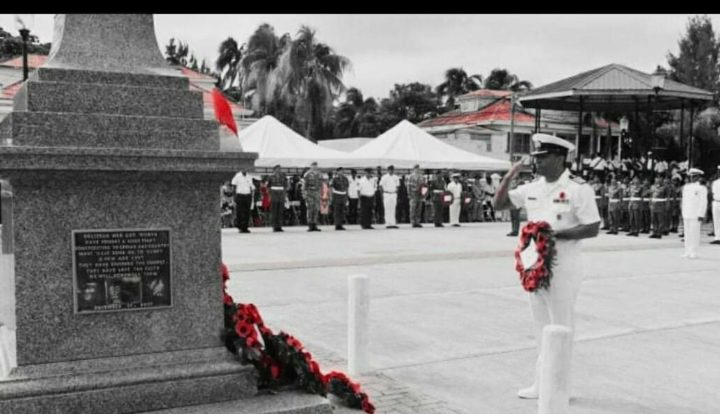 By Aaron Humes: On this day 101 years ago, the guns fell silent and the soldiers began to make their journey home, marking the end of the greatest war to that point in history.

While another would soon eclipse it, and many more followed, the First World War still holds a place in the international imagination.

Annually, countries around the world whether victor or vanquished, observe that solemn occasion on the date known as Veterans Day (United States), Armistice Day or most often, Remembrance Day.

As in the United Kingdom, Belize observes the date on the closest Sunday, which is not November 11 itself.

Dignitaries along with relatives of veterans and living servicemen and ex-servicemen laid wreaths.

The armed forces and BATSUB held their own observance this morning at Price Barracks, Ladyville.

The General Secretary and Office Manager of the League, Valerie Richardson, told us today that there are just nine Belizean World War-era veterans still living. The oldest of these is World War II veteran Emiliano Novelo of San Ignacio Town, who turns 98 next January. The oldest World War I veteran from Belize was a Sergeant Clarke who died at the age of 103.

The red poppy, which grew in France and was famously memorialized in the poem “In Flanders Fields,” is memorialized in the replicas sold to schools and others who assist the League in raising funds to the dwindling number of veterans and widows of former servicemen, particularly the neediest. It too has turned 100 years old.

British Honduran servicemen mostly served the war effort as loggers (of logwood in Scotland), locksmiths, nurses, cooks, and other service areas, not necessarily on the battlefield.

The League now concerns itself with assisting veterans with funds from the poppy appeal and funds sent by the Royal Commonwealth Ex-Services League and Royal Canadian Legion. For Richardson herself, it takes regular cross country trips to meet the veterans and hear their needs, which are above and beyond the Government or Social Security and other pensions they may receive. Those resources, she said, must reach those most in need.

The League’s office remains at Canada House on Newtown Barracks in Belize City with branches countrywide.