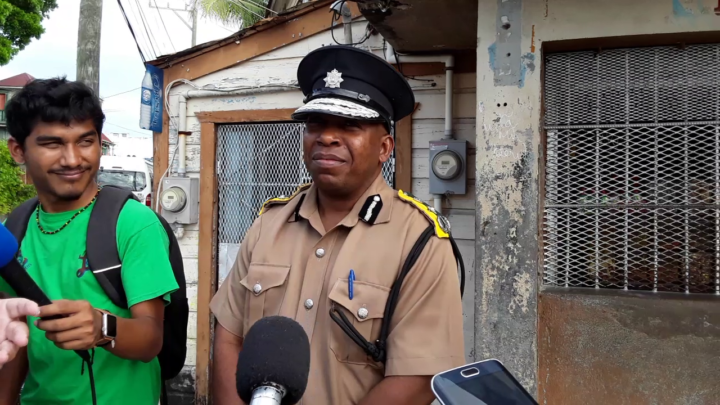 By Aaron Humes: Entering a traditional time of increase in crime, especially major crimes in Belize, the Police Department is firing the first shot by insisting that it has made Belize City and most of Belize safer.

And Commissioner of Police Chester Williams says they are on track to mark as much as a ten percent reduction in murder nationwide at the end of the year, if not more.

This afternoon, Commissioner Williams, standing in the heart of downtown Belize City at the corner of East Canal and South Streets, stated that their statistics – without going into details – cite “a significant reduction in murders” this year, particularly in the Old Capital, over last year.

What few murders still occur, the senior officer said, are what he described as “silly murders – friend on friend, drinking, get drunk and kill each other; incidents at bars, domestic,” and that gang-related murders have dropped significantly.

The Department has leaned on the Conscious Youth Development Program (CYDP) to lead mediation and conflict resolution among the established gangs and sponsored sports and other programs to keep them occupied.

The former officer commanding Eastern Division (South) commends current top cop Alden Dawson and his staff for heeding to his expectations. “I can tell you that as the Commissioner I have been extremely hard on them because we need to see [a] reduction in Belize City. And they have been able to respond to my toughness, in terms of what I expect from them, and because of that, we have seen Belize City having the greatest reduction in murder this year, so far.”

But that does not mean the work is done, and Williams says the figures are not where he would like them to be, but that just means the Department will bear down even harder.

The headaches have spread “out-district”, particularly the Cayo District that has seen a 100 percent increase in murders as of the end of September.

Police are soon to complete training for a new recruit squad, and these will be sent at the end of November into the line of fire in their respective districts to help keep the peace during Yuletide.

“We know [in] the Yuletide season, crime increases, and so as a Department, we have to be prepared to ensure that we ramp up our Christmas anti-crime campaign this year with a view to have minimal crime as possible,” Williams concluded.

We hope to issue an update on the actual figures soon, though official statistics will be released early in 2020.