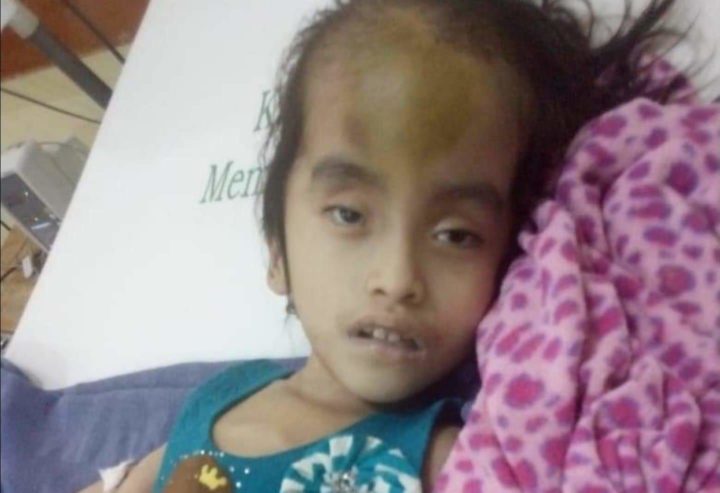 By BBN Staff:  On Wednesday, BBN broke the story of a distraught mother who was desperate for help and answers after her special needs daughter, who suffers from a brain condition called hydrocephalus, was taken away by Child Protective Services and placed in the care of the Dorothy Menzies Child Care Center where she fell and broke several teeth. The family was furious and frustrated with the entire ordeal, and BBN has confirmed that four-year-old Deriana Ah passed away a short while ago tonight.

Baby Deriana reportedly passed away at the Karl Heusner Memorial Hospital tonight and the family believes it is a direct result of the negligence that led to her fall while in state custody. Doctors had previously warned the family that a fall, given baby Deriana’s condition, could be fatal.

The child had been bed-ridden since birth and was to be monitored at all times when taken out of bed. Those close to the family and familiar with her condition say the child should never have been taken away from her mother. Deriana suffered from epilepsy and hydrocephalus, a condition that causes a build-up of fluid in the brain.

Sandra Ah, baby Deriana’s mother, had previously told BBN she left her children with a relative in their Stann Creek Valley Community home on November 3rd while she traveled to Belmopan to conduct a ‘Dollar Drive’ to raise funds to buy medication for the baby. However, by the time she returned at the end of the day, a social worker had taken custody of her six children based on reports that she had neglected them. The social worker who responded to handle the case reportedly took custody of the children and they were all transferred to Belize City.

The children remained in Belize City since then but the mother received a call on Tuesday informing her that there was an issue with baby Deriana. She traveled from Dangriga to Belize City and when she reached she says she was informed that the child had fallen from a sofa to a tiled floor. She claims the social worker told her that the child swallowed her teeth.

Pictures taken after the fall and provided to BBN showed a large bruise in the center of the child’s forehead and several broken teeth in her mouth. On Tuesday evening, the ailing child and another of her children were returned to the distraught mother. The other four children have been placed in the custody of their grandmother and Mrs. Ah has been battling with the court to regain custody of her children.

BBN had contacted the Minister of Human Development, Anthony “Boots” Martinez, who sought clarification on the case and informed us that the report to Social Services was made by a relative. Minister Martinez said the Department acted simply to respond to the report which had been made. He added, however, that his number one concern was the health and well-being of the child. The ministry had also acted to offer other assistance to the family.

With baby Deriana’s unfortunate death, however, the family is mourning a loss that they believe could otherwise have been avoided as doctors had given her a grim prognosis months ago yet she defied all expectations for her life while in her family’s care. The four-year-old child would have celebrated her fifth birthday next month. BBN has also spoken with caregivers familiar with Deriana and her family and who say the family was committed to her care. BBN understands there may be some internal family issues that may have lead to the report having been made against the mother. The family, we understand, intends to follow up the matter legally.