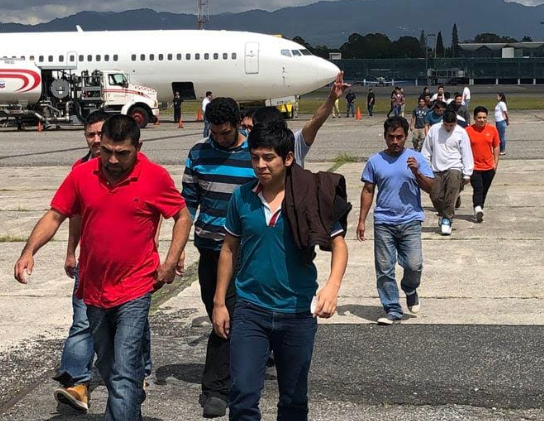 By Aaron Humes: Belize’s Minister of State for Immigration and Nationality, Beverly Williams, says a potential plan to transport rejected asylum seekers in the U.S. to the Petén department of northern Guatemala for re-settlement could unwittingly drag the Jewel into the Central American northern-triangle immigration quagmire.

According to the Washington Post, Guatemalan Interior Minister Enrique Degenhart, who was in Washington on Friday to finalize his country’s asylum cooperation agreement with the United States is planning to receive and resettle migrants in the Petén department, far from Guatemala’s capital. Flights would be sent to Flores Mundo Maya International Airport, better known for hosting tourists visiting Maya ruin Tikal, despite having no direct flights at present from the U.S. Any new routes would require the approval of the U.S. aviation authorities.

Williams told us in a phone interview that Belize is already receiving some migrants seeking asylum and dealing with those under our regime, but at present is more interested in regularizing Belize’s system.

The Refugee Department under the Ministry was only formally re-established in 2016 after years of being a single desk, the Minister said.

The Post says U.S. officials prefer to launch the program using established routes to the Guatemala City international airport, but Degenhart told the Post that the Petén airport option “will probably be used,” possibly in tandem with Guatemala City.

Williams noted that while Guatemala, Honduras, and El Salvador have all reached an agreement to be designated “safe third countries” where asylum and refugee status seekers can wait pending the processing of their applications, Belize rejected such a proposal two years ago because of our own internal pressures.

The agreement faces a number of objections. There is disagreement over how much publicity to give flight landings (wide publicity to deter other migrants versus minimal publicity to avoid domestic backlash). There is concern over how the next administration will follow through (President-elect Alejandro Giammattei has been critical of the agreement but has not said he plans to cancel it). And, among skeptics, there are questions as to how the government could resettle asylum seekers from other countries when so many Guatemalans struggle to find jobs and basic necessities.

Minister Degenhart and President Jimmy Morales are due to leave office in January and U.S. President Donald J. Trump has threatened to punish Guatemala with tariffs if the government backs out.

The Post says the U.S. Department of Homeland Security did not respond to requests Friday for information about the agreement’s implementation, and how many returnees could be sent to Guatemala during the initial phase.