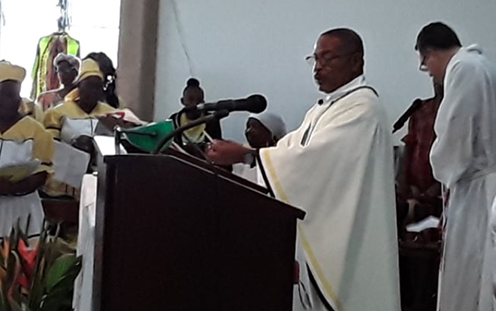 By Aaron Humes: Presiding over the official church service at St. Martin’s de Porres Roman Catholic Church for Garifuna Settlement Day, Bishop of the Diocese, Lawrence Nicasio made special appeals to his fellow Garinagu to pass on the Garifuna language to their offspring.

He added that now that those of other races have adapted Garifuna customs such as making their food and dancing their dances – even better than native Garifuna at times – all that remains is the language, which is under threat from the assimilation of Kriol, English and Spanish.

Meanwhile, he added a call for service in the church. Bishop Nicasio is one of two Garinagu priests in Belize and the second Bishop after the late Osmond Martin. Honduras also has only one Garinagu Catholic priest among a population that is heavily Catholic.

Bishop Nicasio said he realized at 18, when he decided on the life of a clergyman, that it was not about him, but about serving God.

At the conclusion of the two-hour service, a parade proceeds to Northside for official ceremonies.