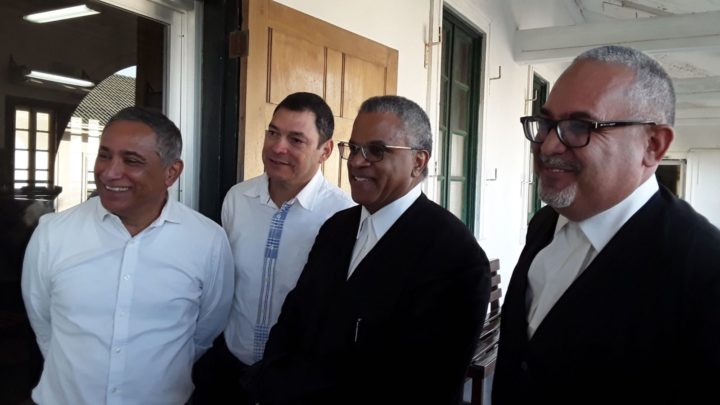 By Aaron Humes: Prime Minister and Minister of Finance Dean Barrow; Financial Secretary Joseph Waight, and Attorney General Michael Peyrefitte are on trial for alleged lack of accountability in the spending of some $1.3 billion over ten years – money appropriated by supplementary bills to the House of Representatives months, and in some cases, years after the Government spent the funds.

The Opposition People’s United Party, represented by its leader John Briceño and Cayo South area representative Julius Espat, contends this violates the Finance and Audit (Reform) Act and other legislation, not to mention the Constitution itself.

Government’s Counsel, Justin Lockhart Simon, had limited questions for Espat and none for Briceño during testimony yesterday afternoon before Chief Justice Kenneth Benjamin. Courtenay, conversely, extensively questioned Waight on the Petrocaribe scheme and how Government treated it and other similar funds. Neither Prime Minister Barrow nor A.G. Peyrefitte reported to court.

Waight explained that the Government spent the monies because of an “urgent and unforeseen need,” which the claimants challenge. The Minister of Finance issued special warrants, said Courtenay, in full knowledge that the National Assembly had not granted legislative approval; advised by Waight that the money was not there and that the limit ($10 million) set by the Finance and Audit Act was regularly ignored and flouted. As Courtenay summarized, “…in truth and in fact, the Government of Belize have spent $1.3 billion, in violation of the law, and doing it with afore-knowledge – they knew what they were doing.”

In the case of one sum of about $100 million distributed in 2012-2013, the Financial Secretary could only say that it had “slipped” his mind and that of the Prime Minister to file a supplementary appropriation bill and get approval for the funds from the House, which they failed to do. Espat noted that Auditor General Dorothy Bradley flagged the sum in her report discussed before his Committee, and flagged a further $200 million in the following financial year. Given that Waight is a seasoned professional and Barrow one of the most accomplished lawyers in Belizean history before taking political office, Courtenay said he finds it hard to believe at best that this could have evaded both of them.

On the matter of the Petrocaribe funds bills, Waight made the point under oath that the portion of the monies paid to Alba Petrocaribe Belize Energy Limited (APBEL) was “private” for their sales. But as Courtenay pointed out, it was a joint venture of Venezuela and Belize and after Venezuela was repaid its funds, the remainder, treated as a loan, was considered public when it went to the Consolidated Revenue Fund. Therefore, it “beneficially belongs” to the Government and people of Belize, and should have been subjected to audit by the Auditor-General and Accountant General. APBEL, Waight noted, was privately audited.