Mother charged with wounding during brawl 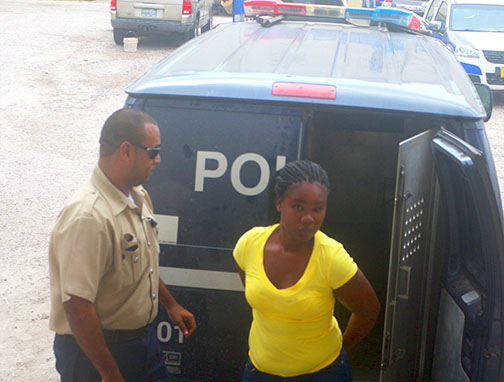 By Aaron Humes: Nicole Lamb, 28, a mother of two, who allegedly cut Angela Bennett twice with a knife during a brawl was charged with use of deadly means of harm when she appeared today before Senior Magistrate Tricia Pitts Anderson. No plea was taken because the offense is indictable.

Lamb was released on a bail of $6,000 with two sureties of $3,000. Initially, the bail was $6,000 with one surety. But attorney Ronell Gonzalez, who represented Lamb, succeeded in convincing Senior Magistrate Anderson to split it. Lamb’s next court date is January 6, 2020.

The incident occurred on April 7 earlier this year, but police did not charge Lamb until November 18. At about 7 p.m. on April 7, the police, based on information they received from their radio control room, visited the Karl Heusner Memorial Hospital where they saw Bennett with cut wounds to her right thigh and the right side of her face.

The police’s investigation revealed that Bennett and several of her friends were in front of a house on Kut Avenue when two females approached them. After a short confrontation, Bennett and her party left and the two females allegedly followed them. When they reached a small bridge near to Queen Square Primary School, one of the women handed a knife to the other woman who was later identified as Lamb, and Lamb allegedly inflicted the cut wounds to Bennett.