Estevan Aranda, 53, identified as victim of hit and run 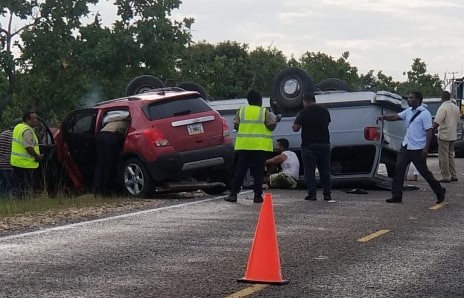 According to police, the accident happened just around 3 o’clock yesterday between miles 18 and 19 of the George Price Highway.

While there are 7 casualties, there are several others hospitalized in stable condition at the Karl Heusner Memorial Hospital.

One of those hospitalized has since been airlifted to the United States for further treatment.

Police could not comment on the cause of the accident except to say officers are still collecting information. The police department also could not confirm that speeding was a factor but did note that the road was slippery.

The department has since used this opportunity to stress the need for caution on the road.

Additionally, drivers are asked to give way to ambulances in the event that they are trying to reach persons in need of urgent medical attention.

Police say that yesterday some of its own responders were trying to reach the scene to rescue those still alive but the road was badly congested.