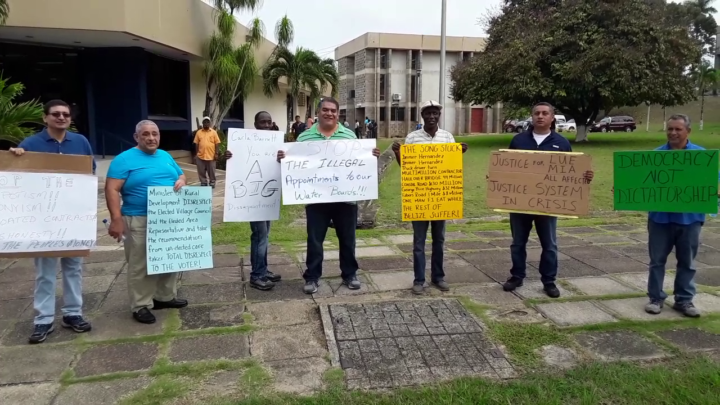 By Aaron Humes: Ahead of today’s meeting of the House of Representatives and coinciding with Tuesday’s decision in the case of William “Danny” Mason and others, several parliamentarians from the People’s United Party carried out a short picket of the Cabinet meeting normally held every Tuesday at the National Assembly and the office of the Ministry of Local Government.

According to Habet, the Government’s sins include corruption in the issuing of contracts for infrastructure, citing the repeated granting of contracts to Orange Walk’s Imer Hernandez, most recently for the Haulover Bridge and Coastal Highway; refusing to empower the village councils and arbitrarily taking over the appointment of water boards without input from the councils, among other things.

Habet said the picket was in preparation for the meeting but admitted that it was “fortunate” that the media was present to pick up the issues.

Zabaneh focused on the need for employment and what he called historic neglect of the Culture Capital.

“We feel that in Dangriga it’s been decades without any serious attention by Central Government and we’re wandering, overall, within a context that seems to be promoting corrupt acts across the board, that our institutions are failing, and the people in Dangriga are especially concerned that we have good strong leadership,” he said.

On the Lucas decision, the Senator expressed satisfaction with the decision, but mentioned the clear link between poverty, unemployment and crime, and said that the time is now to reverse the tide of lack of opportunities.

Ferguson said that the people of Belize must make their own determination and he believes they will vote for change.

“They came in twelve years ago, and promised good governance, transparency and accountability; I don’t see that happening. And you may ask the question when the PUP comes if it will be ‘business as usual’. I can stand here today [and say] that it will not be business as usual. I am prepared that if we go [and do] business, as usual, to step aside, because I want to make a difference and improve the quality of life for my people,” he said.

Ferguson spoke about the citrus industry, which he described as being in dire straits, and that there needed to be a plan to counter unemployment and lack of opportunities.