End of the World Marathon 2019 being held in Placencia today 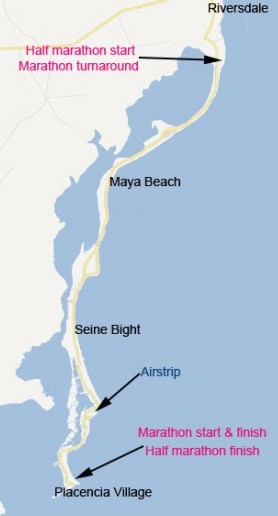 By BBN Staff: Today, the annual End of the World Marathon 2019 charity event kicked off in Placencia.

The 26-mile endurance event started off at 5:30 a.m. at the football field on the south-end of the peninsula and will go through Seine Bight Village and Maya Beach before it loops a few miles south of Riversdale and heads back to Placencia for the finish. There is a halfway point set at Riversdale for those wanting to run the 13-mile half marathon.

The marathon is expected to end sometime after 1 p.m. and will be followed up by a beach party that will run until midnight. The event is used to raise money for scholarships for children in Placencia.

While the event was held in honor of the end of the Maya calendar, which ended on December 21, 2012, the event was a huge success and became a staple event on the social calendar for Placencia. It was initially named because there was a widely publicized confusion that the Maya predicted that the world would end on that date.

Fortunately, the world did not end that day and Archaeologists cleared it up that the end of the calendar meant the end of a life cycle and not the end of the world. The event organizers retained the name, choosing to honor distinguished writer Aldous Huxley, who in 1934 wrote of Belize: “If the world had any ends, British Honduras would certainly be one of them.”