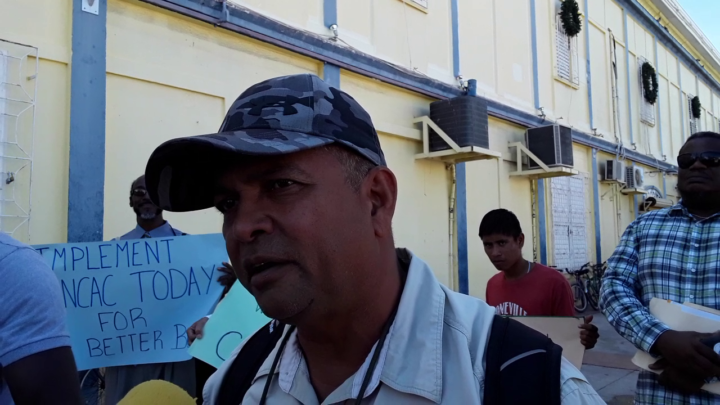 By Aaron Humes: Not even 24 hours after the Government set out its path to managing and eventually prohibiting the use of gill-nets in Belizean waters, one of the biggest seen yet was hauled out of the sea south of Punta Gorda Town.

As explained by Belize Territorial Volunteers (BTV) leader Wil Maheia, a team of researchers had been in the area doing work on crocodiles when they encountered the gill-net, measuring about 1,500 feet or the equivalent of four to five blocks of Punta Gorda Town. It took more than two hours to remove the net and bring it on the land.

And that shows the futility of the Government’s plans, according to Maheia. “…if we are going to make a law why are we not going to enforce the law?  In fact, right now there is a reward for anyone who can bring a picture of the fisheries enforcement boat south of Punta Gorda because it’s never seen in that area.”

The owners of the gill net have not come forward.

Maheia bitterly complained about the Government effectively throwing away the offer from OCEANA and the Belize Coalition to Save Our Natural Heritage to pay the 83 licensed gill-net fishermen $2 million, or $1,200 per month per fisherman, to stop using gill-nets and move to other means of fishing or lifestyles.

“We pride ourselves, we have our politicians in Spain right now dealing with climate change and talking about all the great things that Belize is doing.  But what are we really doing on the ground?  I mean we’re turning down two million dollars.  Each fisherman could get twelve hundred dollars a month for two years while they transition and I cannot understand how the Minister of Fisheries which is, I think, the honorable Godwin Hulse and [Minister of State Dr.] Omar Figueroa turn that down,” he said.

And Maheia, a veteran fisherman himself, predicts a rise in gill net usage in the area south of Punta Gorda at the turn of the year, as fishermen prepare for the Lenten season and higher prices for the fish consumed by the Catholic population. He suggests the ban should have started in the area of Robinson Point, which is as far as the fishermen have now gotten.