Can authorities resolve Anisha Young case after setbacks with DNA? 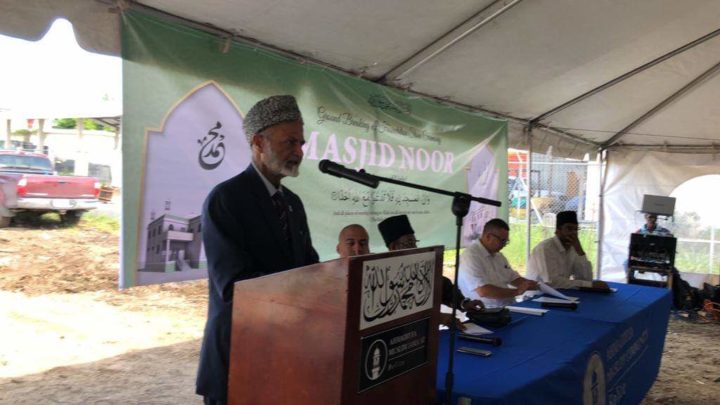 By Aaron Humes: The small but fast-growing community of Ahmadiyya Muslims has been active in reaching out to those inclined to follow the teachings of the Prophet Muhammad.

Within the next year, they hope to be moving out of their present quarters on Buttonwood Bay Boulevard on Northside to a property at Mile 2, George Price Highway, on the Southside – the future home of the Masjid Noor (Mosque of Light). Groundbreaking took place on Saturday morning at the site, located next to Leslie’s Imports.

Imam Naveed Mangla, community president, reports that the Masjid will cost about $1 million and take a maximum of six months to a year to complete. Community members will donate the funds and volunteers from the Canadian community of Ahmadiyyas will organize construction.

Only part of the 1.82-acre property will be used for the mosque; the community will decide whether a community center or school will be built on the remainder.

The mosque is built to fit about 200 people and it will have an Islamic library, which can hold up to 100 people.

At a Friday press briefing attended by fellow Ahmadiyya leaders from Canada, Trinidad and Tobago, Mexico and Guatemala, Mangla noted that “By the grace of God, we had our struggles at the beginning and rightly so. When we newly got established here, people were a little bit reluctant, particularly due to what was going on in the media. At that particular time when we established a community, there was a lot of terrorism going on. Every now and then, you would hear that a Muslim has done this or that. So, people were a bit hesitant. But, like you said, through the humanitarian services of Ahmadiyya Muslim Jamaat in Belize, people are now able to recognize that these Muslims are different, and they are here for the betterment of Belizeans. So, they have welcomed us, and we look forward to making more of a difference here in the country.”

As with all mosques, the new mosque will be oriented in the direction of the Ka’aba, the primary Muslim house of worship in Mecca, Saudi Arabia, more than 8,000 miles away and 54 degrees or roughly northeast of Belize City on the compass. All Muslims face Mecca in prayer to show solidarity and unity, Mangla explains.

The mosque, when completed, will be the second in the country after the Masjid Al-Falah on Central American Boulevard. The movements are separate; those on the Boulevard accede to what may be called “traditional” Islam, while the Ahmadiyyas accept an Indian cleric, Mirza Ghulam Ahmad, as the promised “Mahdi” or messiah not only of Islam, but of all religions.