Cool and moist weather to continue through weekend, expected to decrease on Monday 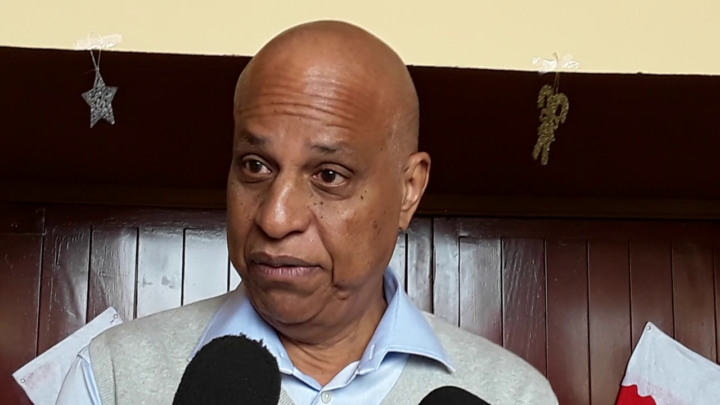 By Aaron Humes: The Government has allocated a total of $1,000,000 in the annual Christmas Cheer assistance program to the 31 members of the National Assembly.

The Prime Minister told reporters: “As we did last year, we tried to be both just and generous, but maybe just before generous… remember this is not cash. You have to do your pro forma invoices and all that …”

The funds are used to sponsor Christmas parties or make donations of goods to families, but there are still complaints, especially from caretakers of divisions where the area rep is from the other party.

The system of patronage or “hand-out” is widely believed to have been devised by the late Right Honourable George Price as leader of the P.U.P. Older Belizeans recall going to his office for weekly consultations where sums might change hands.

Later, constituencies were awarded a “constituency vote” to fund offices, staff and projects in the communities of each constituency. Much of this money has been diverted to pay everything from bills to school fees to medical and other expenses, some Belizeans benefiting more than others.

But there has not been a proper welfare system – other than perhaps the remittances from Belizeans abroad – established until the present government introduced the Food Pantry and BOOST conditional cash transfer programs in its second term in office. The latter has been praised for improving Belize’s statistics in education and health, but it all stinks, to some, of allowing the poorest Belizeans to be dependent on the Government and not self-sufficient and able to work. Indeed, some believe it is their “right” to these crumbs from the national table.

The idea of a Christmas Assistance Program, in searching our records, goes back to 2011, when then-Leader of the Opposition John Briceño told Channel 5 News that neither he nor incoming leader Francis Fonseca, nor several other area reps in what was a lopsided House, got the $40,000 funding allocated by the Prime Minister, a total of 1 million dollars. In language suggesting preparation for a general election (which would indeed follow in February of 2012), Briceño condemned it as “vote-buying” and “bribery” and suggested that the Government had failed.

But the P.U.P. lost those elections, and 2012 did not see any cheer announced.

The program returned with a vengeance in 2013, fuelled by Petrocaribe funds from Venezuela.

In the House, the Prime Minister outlined the now-standard procedure for the program: “The minister, area representative, caretaker, would identify the supplier and the list of items to be supplied to constituents, to good Belizeans. The supplier would submit a pro forma invoice for the items. Three, the ministry will then issue a purchase order to the supplier. Four, the supplier would then submit an invoice along with a receipt to be signed by the area representatives, ministers, caretakers; that the goods have been taken in to charge.

Five, the Ministry of Human Development should keep appropriate documents of each transaction. The suppliers are to be bona fide business/commercial establishments who are reputable and are well-known to be in the business of supplying food items, toys, etc. Suppliers should not be middlemen or intermediaries nor anyone who might be closely connected to the minister, area representative or the caretaker. Under no circumstances (and that’s in bold) should the area representative receive (and in bold again) cash payments either directly or indirectly.”

The Opposition were then seeking to overturn the Petrocaribe Loans Act in the courts and Cayo South area representative Julius Espat, made much of saying he would not take the money.

A national downturn in the economy arrived in 2015 and things were truly “dread.” Financial Secretary Joseph Waight confirmed to Channel 5 that only Government members got cheer and their lowest total to that date: $50,000 each for a total of $850,000.

And the program reached its lowest in 2016, as Deputy Prime Minister Patrick Faber confirmed Christmas Cheer “was not on,” though fellow Minister Wilfred Elrington clarified that some constituencies, such as his own and Michael Finnegan’s Mesopotamia, were able to claw together a mini-celebration from their own funds.

There was a rebound in 2017, as $625,000 was handed out – $25,000 to Government, $12,500 to Opposition. And Briceño, who had replaced Fonseca as leader in 2015, seemed resigned: “We do have a fundamental problem where we start using taxpayers’ money to just spend in such a manner. But in this instance, we knew nothing about it; it was presented to us then and there. And many people are going through a very, very difficult time and it would have been very difficult for us to say at this time that we are not going to accept the Christmas Cheer.” 2018 saw the same figures.

So the Government gave itself a grand total of $7.04 million over 8 years, while the Opposition received $1.38 million for a total of $8.42 million spent. Programs were also established for Mother’s and Father’s Day cheer, not to mention the infamous “Petrocaribe Pibil Party” Collet constituency trip organized by Faber. The Ministry of Human Development headed by Port Loyola’s Anthony Martinez has the records of spending and hopefully, they can be accessed for a transparent look at each constituency’s spending of what are taxpayer funds to be repaid to the Bolivarian Republic.

In the end, as John Lennon once sang, “And so this is Christmas/For weak and for strong/For rich and the poor ones/The world is so wrong/And so happy Christmas/For black and for white/For yellow and red one/Let’s stop all the fight. A very Merry Christmas/And a happy new year/Let’s hope it’s a good one/Without any fear.”