Teachers wearing green tomorrow, sending a message to the Ministry of Education 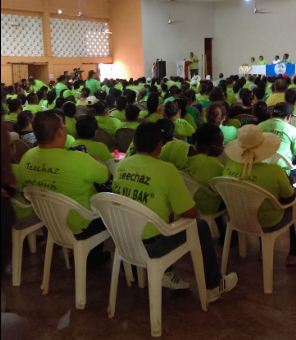 By BBN Staff: At the reopening of schools tomorrow, the Belize National Teachers Union (BNTU) is calling on its membership to show up in their green union shirts or some other green shirt, instead of their full school uniforms, as a show of readiness to take action against the Ministry of Education (MOE).

The BNTU’s national president, Elena Smith, addressed the issue in her holiday message to teachers and made media rounds explaining the latest contention between the BNTU and the MOE involving new proposed amendments to the Education Rules.

Smith stressed that the union has not seen the finalized amendments but that the union has learned that the Ministry has moved to replace rules 132 (4),(5), and (6) which sets out the duration of Christmas, Easter and Summer vacations, and replace it with a new 132 which empowers the Chief Education Officer to set the duration of each of these vacation periods to ensure that the school year contains 180 contact days.

Smith says that the Ministry acted in bad faith because the union did not have a discrepancy with the Summer or Easter vacations. She also said that the union has serious concerns about the Chief Education Officer being empowered to set the length of the vacations as opposed to having it clearly outlined in the rules.

She stressed that the BNTU is not preparing for strike action as there are several tiers of action that need to be taken before it comes to that, but that the wearing of the green shirts is a symbol of the union’s readiness to address having its membership disrespected.

The union also had other concerns with the MOE including the length of teacher contracts and the process for the emergency hiring of teachers; however, those issues do not raise as much alarm as the Rule 132 issue.