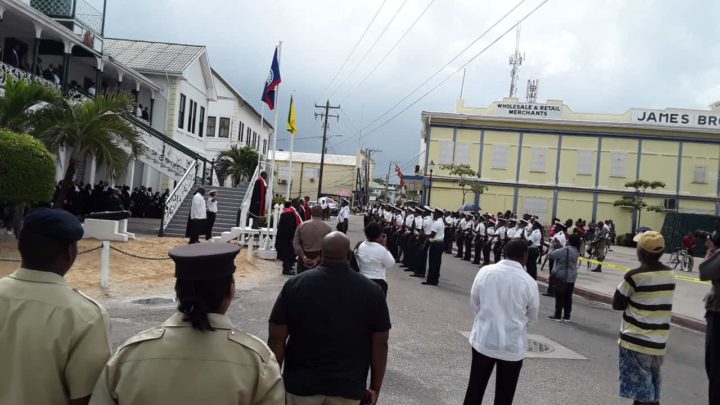 By Aaron Humes: With no hint as to his own plans and the ranks of the Bar Association not terribly thinned by the active boycott of senior officials, Chief Justice Kenneth Benjamin today repeated his call for more to take up the role of judges and magistrates.

Speaking through his Cabinet colleague Wilfred Elrington, Attorney General Michael Peyrefitte called as well for a more active, more reachable legal community, practicing not only in the courts but also writing articles and doing public counseling in the press.

The court reports substantial clearing of both civil and criminal cases in 2019, with only 109 persons on remand at the turn of the year and 22 awaiting resentencing for murder – still too many, according to the Chief Justice.

The Chief Justice noted the “epic” six-month trial of William “Danny” Mason and his cohorts for murder, which ended in conviction in December. Presiding judge Antoinette Moore disposed of 37 other cases in Belmopan. She will preside over the Southern Session of the court in Dangriga after completing mourning for her recently deceased father, Frank Moore.

There was a courtesy mention of staff turnover with one justice already resigned and as many as four, including the Chief Justice, to follow. All he said was that, “the matter is being addressed” by the Judicial and Legal Services Commission.

The administration of justice took the Court’s complement far afield in travel and subjects – the Chiquibul with Friends for Conservation and Development (FCD) concerning illegal activity, judicial ethics, legal training and forensic sciences.

Coming improvements include a prison to court link to reduce security issues and guidelines for sentencing for guilty pleas.

We’ll have much more in subsequent stories.