Beware of fake posts as the 2020 general elections draw near 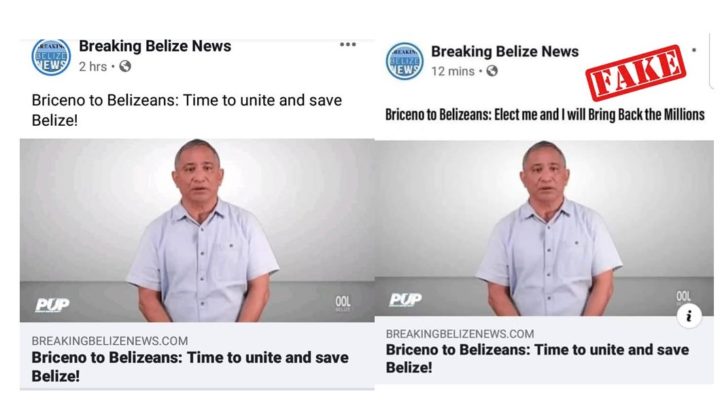 By BBN Staff: The 2020 general elections campaign has already started in Belize and the major political parties have started expending resources on their campaigns in an effort to secure a win.

Belize’s 2 major political parties, the PUP and the UDP will be steadily stepping up their presence in the world of online advertising.

Even the world’s largest social network, Facebook has ramped up its efforts to fight election malpractice including the virality of fake information.

Researchers at the Massachusetts Institute of Technology (MIT) outlined out a four-point strategy to understand the impact of fake news and social-media manipulation.

Being the largest digital news media platform in Belize, Breaking Belize News has been targeted on several instances by political associates using our news logo and photoshopping the headlines of articles in an effort to manipulate the audience to believe that such ‘fake’ article was published by our site.

Earlier in 2019, there was the duplication of news pages with those of real news pages in Belize, where our colleagues’ logos were also being used to share fake news and manipulate readers.

Even Government ministers were victims of trolls creating fake pages purporting to be those of ministers.

Major news outlets and nonprofits are tracking misinformation trends to develop global solutions to the threat they pose to democracy.

Our neighbor, Mexico brought together journalists and established ‘Verificado’, a fact-checking website to debunk fake news. Verificado also has a dedicated hashtag, #QuieroQueVerifiquen (#IWantYouToVerify) for regular people to ask the team to fact-check a claim. Journalists from 90 news organizations are participating in Verificado to fight fake news.

The United States of America is fighting fake news with readers using Snopes, Fact Check.org, Politifact among others.

This is why debunking and fact-checking are crucial especially since political operatives will undoubtedly again attempt to use the virality of fake news to sway voters’ opinions.

BBN’s Zoila Gonzalez who holds a Certificate from the Poynter Institute on Building Digital Literacy and Media Responsibilities in Democracies in the Digital Age shared some helpful tips to assist our readers with spotting fake posts and fake news to avoid the virality of misinformation.

The first step on spotting fake news is to do a visual assessment of the screenshot sent, or story shared. Most of the time, it will look amateurish with fonts not matching. An example is illustrated below.

The article was published by Breaking Belize News but the correct headline is the one below the website’s name. In this case, a screenshot was taken of the correct story and then photoshopped with the fake headline at the top of the picture. 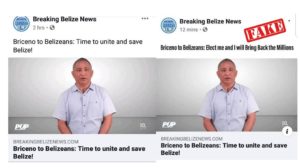 The second step before sharing something is to take a few seconds to search the official pages, news media pages, Government or organization pages to view what they published.  In this instance, Breaking Belize News published a story headlined: Briceno to Belizeans: Time to unite and save Belize!

When debunking fake posts and fake pages, take some time to search for a reputable online news agency to check if they have any stories on the shared release or statement. ( As in case of the fake Ministry of Health poster circulated in 2019)

Next, take some seconds to click and open the page that posted the release and check their page details including date of creation, followers, and likes.

For example, the fake Ministry of Health page had only 36 likes while the official page has 5,453 likes.

Another tip to note is that in Belize, press releases are posted in the country’s official language, English.

Another way to determine if the page is fake is to check the page’s transparency section: The fake page was created on November 11, 2019, and is listed as a political organization. (Ministry of Health)

The real page was created on February 3, 2015 and is listed as a Government organization. (Ministry of Health)

While there is a growing tribe of truth warriors fighting fake news around the world, there is also the prevalent presence of fake information being shared on platforms of social media giants to try and influence readers and especially voters so as to win elections.

With the campaigns gearing up where Belizeans will determine if the ruling UDP gets another chance at serving or if the opposition, PUP makes a comeback to serve as the Government of Belize, Breaking Belize News will assist in debunking and sharing more useful tips for readers and voters to be well informed, empowered and make their decision based on the facts presented to them.