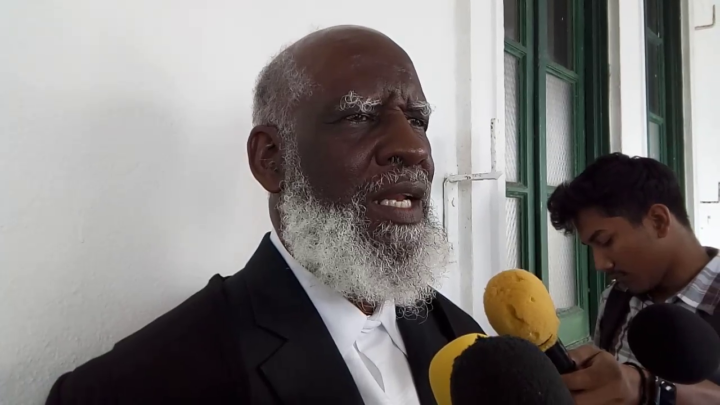 By Aaron Humes: Attorney General Michael Peyrefitte missed yesterday’s ceremonial opening of the Supreme Court, handing over to Cabinet colleague Wilfred Elrington, who served in the role a few years ago.

And the Senior Counsel had a suggestion to help clear the backlog of undelivered judgments by Chief Justice Kenneth Benjamin, which continues to hang over him and was one of the reasons the senior members of the Bar Association boycotted yesterday’s opening.

“The question of outstanding judgments is a long one, and it seems to me that that has happened largely because we have not kept up with the changes that have taken place over the years. Because certainly in places like the United States, the Chief Justice certainly, I don’t think, has the obligation to do judicial work and administrative [work]; even those who have only judicial work have interns to help them to prepare their judgments, so that they can give them in a timely manner. I think it is high time now that Belize employs interns to assist the judges in the preparation of their judgments, so that they can be well-researched, and delivered in a timely manner,” Elrington said.

He may likely be referring to the law clerks used at the U.S. Supreme Court, usually, a prestigious position that can lead to judicial and government work down the line, as in the cases of current U.S. justices Brett Kavanaugh and Neil Gorsuch, who clerked for retired Justice Anthony Kennedy in the 1990s.

Elrington’s reading of Peyrefitte’s address made note of plans to codify the substantive laws of Belize up to 2018, due by March; increased activity at the Vital Statistics Unit, which saw a protest last year over availability of documents during the re-registration process, and Legal Aid and Services Centre, which helped 200 persons; and plans to merge the IBC and Companies Registries.

Elrington also took time out to personally congratulate Justice Antoinette Moore, Director of Public Prosecutions Cheryl-Lynn Vidal and others for the successful prosecution of the “Mason Five” which took more than six months and resulted in convictions in December.