Four years later: No arrests for murder of Anne Swaney 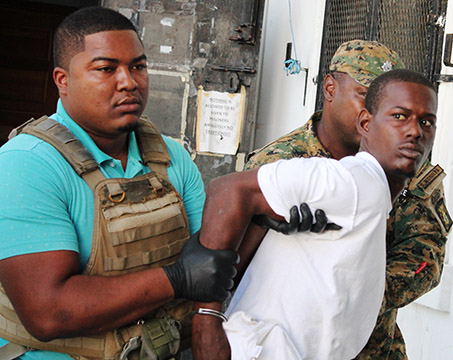 By Aaron Humes: Twenty-seven-year-old Kenrick Longsworth was feeling the heat yesterday morning as he faced charges of murder in the death of his three-year-old step-son and grievous harm to his brothers, ages 2 and 4.

Members of the Gang Suppression Unit (GSU) were assigned to bring Longsworth to and from Central Prison in Hattieville this morning, shackled at hands and feet.

He was the first prisoner to exit the van and was so restrained he could barely walk onto the veranda, but he refused an officer’s help to get out. He later complained of not being able to walk properly and that the officers locked him up in the court’s cellblock while still handcuffed.

According to Longsworth, that was when he began to act out and hit the handcuffs on the cell door bars, making noise. He blamed the officers in charge of the cellblock for the rough treatment, and his mother, Lavern “Anti-Christ” Longsworth, intervened to say she saw no reason why her son would be “roughed up” this way.

Longsworth was practically dragged into court, heckled by a gathered crowd on the street, to face Chief Magistrate Sharon Frazer. As the offenses with which he is charged are indictable, no plea was taken and bail was denied due to the nature of the offenses.

The Lovely Lane resident told the court that he is presently unemployed and was taking care of the kids while his partner works, as was the case on Friday, January 10. When she returned home in the evening, she saw that her children were suffering from injuries and the 3-year-old appeared dead. He was pronounced dead on arrival at Karl Heusner Memorial Hospital. The other children were examined and treated by a doctor who classified their injuries as grievous harm.

Apparently, the children were beaten with a blunt object. However, contrary to reports, there were no indications of any sexual assault on the children and no charges to that effect were laid.

Longsworth had gone on the run shortly after the incident but was apprehended Sunday afternoon in Isabella Bank village, Belize District, and brought back to Belize City to face charges. He has had several previous incidents with the law and has been charged with open offenses including attempted murder, robbery, and aggravated assault. He was out on bail for aggravated assault upon police officers for a shooting incident in which he allegedly shot at police at a checkpoint on New Road in 2019.

He was remanded until March 12.