Suspect in Timroy Neal murder surrenders himself to police 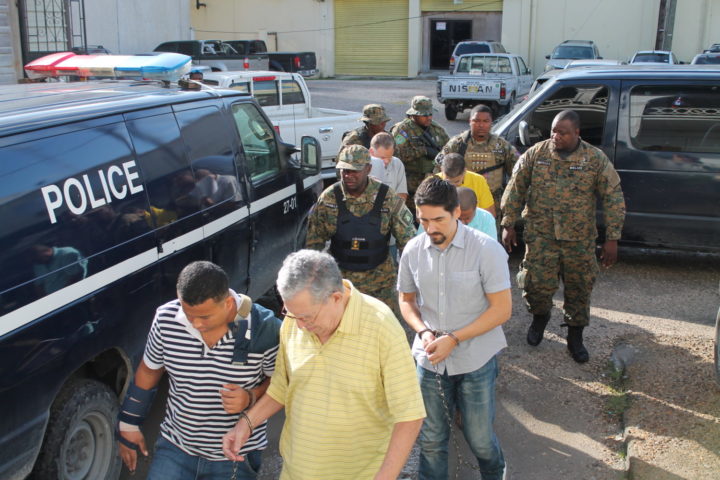 By Aaron Humes: The sensational case involving eight foreigners who were jointly charged with drug trafficking for the importation of over 3,000 pounds of cocaine continued Wednesday in two separate Magistrate’s Courts.

The case is adjourned until March 18 pending disclosure to be presented; the court prosecutor says he expects instructions from the Director of Public Prosecutions as to how to proceed. The case may be tried at summary level at the Magistrate’s Court or on indictment at the Supreme Court, where a plea would be taken.

Last September, police had tracked down an aircraft that left from Venezuela and landed on the Coastal Road near to La Democracia. The occupants of the aircraft did not surrender easily and there was an exchange of gunfire between them and the police in which two of them were injured.

Next the group appeared before Senior Magistrate Tricia Pitts-Anderson, who heard an application for forfeiting of the plane alleged to have landed the cocaine bales as well as a vehicle found in the area.

Appearing for the State was new attorney and Inspector of Police Dervin Sambula, who previously served in the Gang Suppression Unit (GSU) before going away to study law.

Attorney representing three of the eight accused, Oswald Twist, objected, citing prematurity and the Senior Magistrate agreed. She instructed Inspector Sambula to provide the court with his arguments as to whether the items to be seized were used in the commission of the crime.

Richard “Dickie” Bradley, hired to look after two of the eight accused but not formally representing them, told reporters he considered it “highly unlikely” that bail would be granted in the circumstances. According to those he acts for, they were spraying his crops in the area and heard something like a plane landing and went to see what it was.