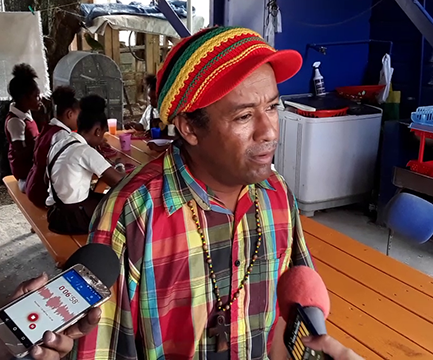 By Aaron Humes: It may be the fastest recovery ever.

An interview with media houses on Tuesday afternoon by Joel “Dara” Robinson, covered in a previous story, has touched off an outpouring of support both at home and abroad for his long-running feeding program, allowing him to soldier on.

Robinson told us this evening, “That interview shook up a lot of things that needed to be shaken up.”

For instance, people in the know are questioning Social Security, which had made some donations three years ago and promised a long-term assistance program with Robinson, about why the report they commissioned to facilitate that assistance has not yet been presented and what took so long.

The current representative of the division in which the program is located on Dunn Street – the People’s United Party’s Kareem Musa, Caribbean Shores – has reached out to offer his assistance.

And the man who hopes to unseat him, the ruling United Democratic Party’s Lee Mark Chang – whose Chon Saan Restaurant is a few blocks away on Kelly Street – presented a check this afternoon for $1,000 and promised another $1,000 per month for the remainder of the current school year, which ends in June.

Robinson plans to hold him to it, “win or lose, because he gave his word.”

Chang said he would also assist in taking around letters seeking donations from fellow businessmen.

Robinson, meanwhile, is heartened by the renewed support, especially from the Diaspora. He told us he is glad that people have remembered his work outside of his twice a year fundraising concerts/food drives, the next coming in February. He says now he can continue feeding the 50 children who come to him every weekday for the near future.

To continue the support, contact Robinson at 623-3662, or donate directly to his Atlantic Bank account number, 211-573-215 in care of Dara’s Feeding Program.