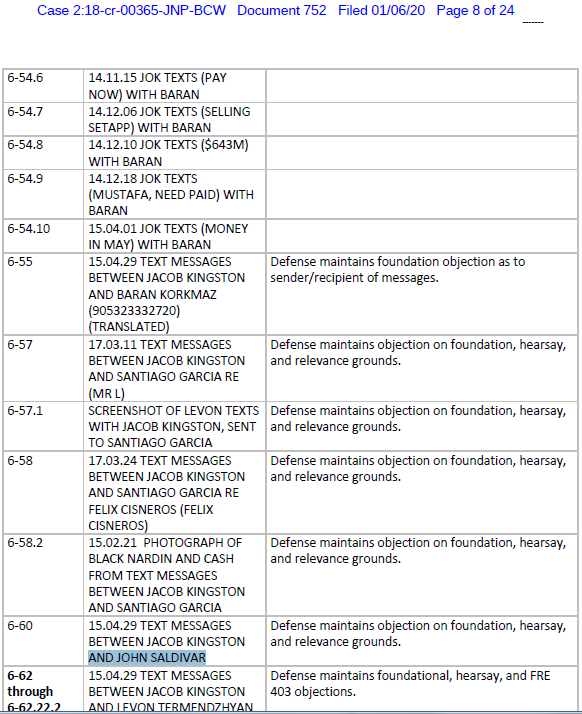 By BBN Staff: Court documents relating to the trial of alleged fraudster, Lev Dermen, in the United States have surfaced revealing more about his connection to Belize.

Dermen is on trial for an alleged bio-fuel fraud scheme in the United States, costing over $500 million in renewable fuel tax credits. The reports include court documents alleging bribes paid to senior American officials and a Government Minister from Belize.

Businessmen, Isaiah Kingston, Jacob Kingston and Lev Dermen are being charged for money laundering and fraud.

In one such document now circulating on the internet, the name of Belize’s National Security Minister, John Saldivar, appears on a list of evidence being submitted to the court as part of the trial.

The official court document names Saldivar as having received and sent text messages to Jacob Kingston, Dermen’s associate who is now testifying against Dermen and who is said will testify that two Belizean government officials received payments for their roles.

Saldivar admitted to having met Dermen in 2013 and interacted with him at the Gold Cup in 2013, and his interaction with Dermen has been heavily ventilated by various media houses in Belize.

At a press conference hosted last week, PM Barrow asserted that he questioned all Cabinet Ministers on their involvement with the alleged fraudster, Dermen, and he was satisfied with their responses when they each told him to his face, that they had nothing to do with Dermen’s fraud nor had they collected any money from him.

At the time, PM Barrow also claimed that he would fire anyone who had received money for services from Dermen.

It remains to be seen how, or if, the PM will respond to one of the party’s two main candidates in the upcoming leadership convention being named in US court documents now filed as part of the Dermen’s fraud trial.

Saldivar, for his part, has denied suggestions of his involvement in any act of bribery.