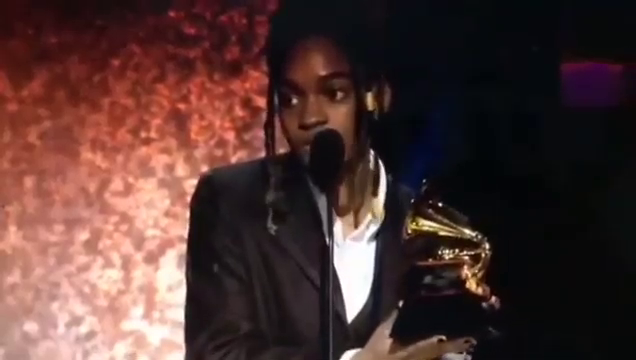 By Aaron Humes: Mikayla Simpson, 19, alias Koffee, from Spanish Town, Jamaica, made history tonight with a Grammy Award for Best Reggae Album, becoming the first female and youngest winner since the award’s establishment in 1985.

Accepting the award, Koffee paid tribute to her producers and fellow musicians Julian Marley, Steel Pulse, Sly and Robbie and Morgan Heritage “for all the input they made in reggae industry and the music. I’ve learned a lot from them and from other older people in the industry and that’s why I’m here; that’s what brought us all here. So I just want to say that this one (holding up award) is for all of us; this one is for reggae, this one is for Jamaica. Thank you very much and blessings.”

According to Wikipedia, Koffee gained popularity after uploading a video to Instagram of her singing. In 2017 she released her first single, “Legend”, with just her voice and acoustic guitar. A tribute to Jamaican sprinter Usain Bolt, the song became a viral Instagram hit, once the athlete reposted it on his own Instagram. Awareness of the violence and social problems she witnessed growing up has influenced her lyrics, and besides Protoje and Chronixx she has cited Super Cat and Giggs among her musical inspirations.

The category has recognized almost every major reggae, dancehall and ska artist, especially from Jamaica, since its establishment. Koffee’s competition this year included seminal bands Steel Pulse and Third World, Bob Marley scion Julian and producers/compilers Sly and Robbie. Another Marley son, Ziggy, has captured 7 wins in the category, most all-time, and his brothers Stephen and Damian have won gongs as well.
The National Recording Academy of Arts and Sciences (NARAS), sponsors of the awards, is going through upheaval at the moment, with fired president Deborah Dugan charging that some of the selections for the awards are influenced by artists on the selection committee, and some more deserving artistes in her view have been shut out. She has also charged sexism by some Academy members.

Koffee’s win was not televised; the televised portion of the awards, hosted by Alicia Keys, begins later this evening at Staples Center in Los Angeles on CBS Television.