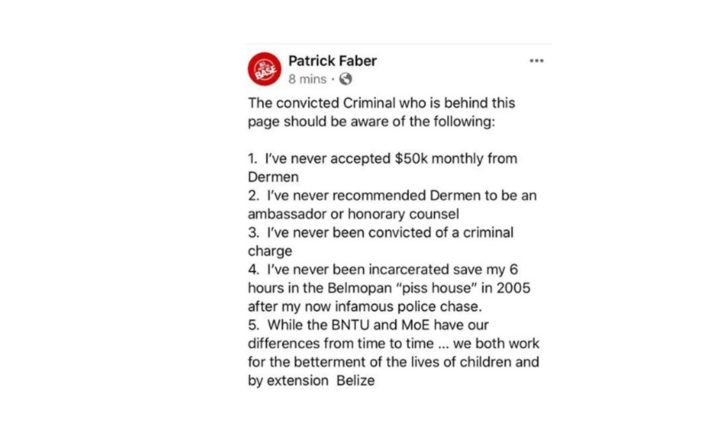 By BBN Staff: The national convention for the United Democratic Party is only days away and as speculated, the campaign has heated up among the candidates.

On January 23, 2020, a Facebook page that goes by Associated Belize Press questioned the name of the Government minister called in the Lev Dermen case files.

In the post, the page claimed that documents surfaced showing that evidence will be presented in the case revealing text messages between Jacob Kingston and Deputy Prime Minister Patrick Faber.

In response to the allegations, the Deputy Prime Minister has taken to his personal Facebook page to defend himself and call out the person behind the page.

“The convicted criminal who is behind this page should be aware of the following”, Faber says as he goes on to list that he never accepted $50,000 monthly from Dermen, he has never recommended Dermen to be an ambassador or Honorary consul and he has never been convicted of any criminal charge.

Faber alludes to the fact that the page is owned by a highly-connected figure inside the UDP’s current hierarchy who has pledged support for John Saldivar as Leader of the UDP.

Meanwhile, Saldivar for his part has also denied allegations that he received money from Dermen.

“Imagine the amount of people who are conspiring from outside my Party and from inside my Party to see me fail. Naw go happen sah. Not a corrupt bone in my body. Me dah God Pickney,” Saldivar posted.